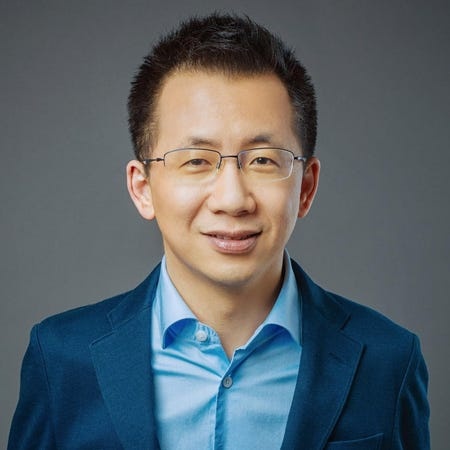 Zhang Yiming is a Chinese businessman and entrepreneur who became popular after founding ByteDance, which has grown to become one of the world’s largest technology companies.

The techpreneur founded ByteDance in 2012 with the goal of inspiring creativity and enriching lives. He and his team made use of machine learning in mobile online products in a groundbreaking manner, and he led them in developing the company’s first flagship product, Jinri Toutiao.

Toutiao is now China’s largest news platform. Zhang, who has always been keen enough to identify opportunities in the video business, has directed his company, since 2014, into the field by launching multiple video products which are loved by users, such as Xigua and Douyin Video.

Available records show that more than 600 million active users create and consume content on Douyin every day, and Xigua Video is one of the biggest mod-to-long video platforms at the present time.

As a young tech entrepreneur, Zhang Yiming established a vision in his odyssey from the onset. He dreamed of building a global company that serves users from all parts of the world, and that dream eventually became a reality.

In 2015, his ByteDance company launched its first non-China product in an attempt to register the company on the international scene. After enjoying primary success in China, ByteDance took its commitment to the global short video business and launched TikTok in 2016.

The app gained a widespread reputation immediately and added a significant boost to Zhang Yiming’s net worth which currently stands at several billion dollars. While developing his businesses at hand, Yiming, who likes to take long-term views, has continued to look out for new growth engines for his company and has diversified ByteDance into emerging sectors like education and science.

Zhang Yiming was born on April 1, 1983 in Longyan, Fujian, China. In 2001, he enrolled at Nankai University in Tianjin and graduated in 2005. In college, he majored in microelectronics before switching to software engineering.

Mr. Zhang is best described as an internet entrepreneur and businessman. He founded ByteDance in 2012 and followed up his achievement by developing the video-sharing platform TikTok (formerly known as Musical.ly), and the news aggregator.

His career began in February 2006 when he was employed as the first engineer at the online travel platform Kuxun. His remarkable performance at the tech outfit earned him a promotion to the position of technical director a year later.

In 2008, he left Kuxun to work for Bill Gates at Microsoft, but he felt uncomfortable by the company’s corporate rules. Zhang left Microsoft after working there briefly and joined the startup Fanfou, which failed to accomplish much. When Kuxun was about to be sold to

Expedia in 2009, Zhang took over the real estate search business of Kuxun and started his first company, 99fang.com.

Zhang’s vision to push relevant content to people led him to start his company ByteDance. After he failed to get several venture capitalists to invest in his idea, he finally secured funding when Susquehanna International Group agreed to support his startup.

In August 2012, ByteDance launched its first viral product, the Toutiao news app, which attracted over 13 million daily users within two years. In 2014, Sequoia Capital, which initially rejected Zhang’s idea the first time, came around and invested $100 million in the company.

Zhang focused on expanding ByteDanceto to reach other parts of the world, as opposed to other tech CEOs in China who focused on simply growing their company domestically.

Zhang made sure that ByteDance’s workplace productivity application “Lark” was targeted at the Japanese, American, and European markets, rather than just focusing on China as initially proposed.

In September 2015, ByteDance launched TikTok (known as Douyin in China). Although it initially experienced little fanfare upon launch, the product became a hit with millennials and has grown to immense global popularity over the years.

In 2016, ByteDance acquired a rival app Musical.ly for an estimated $800 million and integrated it into TikTok.

In 2021, with more than 2 billion monthly users in all its mobile apps combined, Zhang’s ByteDance is valued at $75 billion, surpassing Uber to take the first spot as the world’s most valuable startup.

Zhang’s leadership in tech has earned him a couple of prestigious honors. He made it to Time magazine’s 100 most influential people in the world in 2019, appeared in Forbes China 30 Under 30 list in 2013, and was included by Fortune magazine in its 40 Under 40 list in 2013.

As of the time of filing this report, Zhang Yiming’s net worth is estimated at $44 billion. His wealth has come from the ByteDance internet technology company which he founded and currently controls as chief executive officer.

Zhang’s wealth makes him one of the youngest tech multimillionaires on the planet. His company, ByteDance, is also regarded as one of the most valuable startups in the world and continues to boost the entrepreneur’s fortune through its products TikTok and Toutiao.