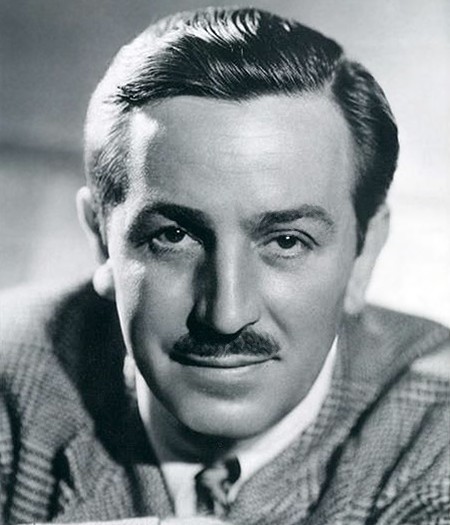 Walt Disney was an American film producer, animator, and writer. A pioneer of America’s animation industry, he introduced a list of developments in the production of cartoons. As a producer, Disney holds a record for most Academy Awards won by an individual, having bagged 22 Oscars from 59 nominations. He was presented with seven Emmy Award and two Golden Globe Special Achievement Awards, among other honors. Many of his films are included by the Library of Congress in the National Film Registry. At the time he died in 1966, Walt Disney net worth was equal to roughly $1 billion (after adjusting for inflation).

Walter Elias ‘Walt’ Disney was born on 5 December 1901 to Elias Disney and Flora Call Disney. While his mother was a German-American, his father was an Irish-Canadian by descent. He had four siblings, a sister and Three brothers. When he was about the age of four, his family shifted base to Marceline, Missouri. It was here that his life-long fascination for painting and drawing was developed. When he was ten years old, the family moved to Kansas City where he received his early education. A theatre aficionado named Walter Pfeiffer became an early guiding light and mentor for him as he introduced his namesake, young Walter, to a world of motion pictures and vaudeville.

Moving to Chicago as a 16-year-old in 1917, Disney enrolled himself at McKinley High School. At night, he attended a course at Chicago Art Institute. He served as a cartoonist for his school’s newspaper. He soon dropped out of school to join the military but wasn’t accepted because he was underage. This made him find employment as an ambulance driver for the Red Cross.

Moving back to Kansas City as an 18-year-old in 1919, Disney found work as an ad-writer at the Pesmen-Rubin Art Studio. The following year he was employed by Kansas City Film Ad Company. His profile consisted of making commercials from cutout animations. He soon picked an interest in animation and shifted his focus to becoming an animator. However, finding interest in cel animation, he left the company to open his own business venture and offered employment to Fred Harman, who he worked together with at Kansas City Film Ad Company. He got into a business deal with Frank L Newman who owned a local theatre, to screen the cartoons which he called, “Laugh-o-Grams”. The cartoon was a success and it’s popularity led to the opening of the Laugh-o-Grams studio. However, due to financial debt the studio was closed in 1923.

Not minding to the bankruptcy, Disney aimed at setting up a studio in California. In collaboration with his brother Roy, and a partner Iwerks, he established Disney Brother’s Studio. In 1929, the company released a series of musical shorts, named ‘‘Silly Symphonies’’, which featured Mickey’s friends, Pluto, Goofy, Donald Duck, and Mickey’s girlfriend Minnie Mouse.

His most memorable cartoon short was created in 1933, titled “The Three Little Pigs”. This cartoon was a huge hit and garnered positive reviews. Furthermore, the anthem song of the cartoon, ‘’Who is Afraid of the Big Bad Wolf’’ became a significant number during the Great Depression. After a successful training period, his high-profile transition of a feature film named, ‘’Snow White and the Seven Dwarfs’’, went into production in 1934, and premiered at Carthay Circle Theatre, Los Angeles in 1937.

The film, ‘‘Snow White and the Seven Dwarfs’’ opened publicly in February 1938. It was a big hit and a blockbuster at the box office and was the most successful film of 1938. In its initial release, ‘‘Snow White and the Seven Dwarfs’’ had grossed $8 million. The grand success of the film did not only catapulted the position of Walt Disney in the world of film and animation but also launched an era, which was later named the Golden Age of Animation.

Following the registered success of his first film, Walt Disney net worth was accumulating in millions. He started working on many more films, including, “Bambi”, “Dumbo”, “Fantasia”, and ‘‘Pinnochio’’. Simultaneously, his short staff continued work on all the characters of Mickey Mouse, Pluto ,Donald Duck, and Goofy cartoon series.

A visit to Oakland’s Children fairyland inspired him with the concept of Disneyland. After five years of thorough planning, fund raising, projecting and execution, the opening of Disneyland Theme Park happened on July 17, 1955. The park primarily gave kids and families an experience to explore the world of fantasy.

Walt Disney married Lillian Bound in 1925. The couple had a daughter, Diane Marie Disney in 1933 before adopting Sharon Mae Disney in 1936.

He suffered from lung cancer and died on December 15, 1966. He was cremated on December 17 1966 and his ashes were interred at Forest Lawn Memorial in Glendale, California, United States.

As a producer, Disney holds a record for most Academy Awards won by an individual, having bagged 22 Oscars from 59 nominations. He has seven Emmy Awards and two Golden Globe Special Achievement Awards, among other honors for his distinguished works.

As an American film producer, voice actor, director, animator, screenwriter, writer, entertainer and entrepreneur, Walt Disney was a pioneer of America’s animation industry. He is best known as the man behind Walt Disney Productions, which is one of the most popular and biggest motion picture producers in the world.

At the time of his death, Walt Disney net worth through his various assets was calculated to be around $100 – $150 million in 1966 dollars which is equal to $750 million – $1.1 billion today. His stake in the Disney company alone was worth approximately $600 million (after adjusting for inflation). He was also an owner of the largest individual stake in the company Walt Disney Inc., which was established in 1953 to control the intellectual property, design, and other assets of Disney.

Upon his death, the animator left 45% of his estate to his children and wife in form of a family trust, and 10% to his nieces, nephews, and sister. The remaining 45% established a charity. The majority of the charity’s funds were given to a private art school CalArts. After Disney’s death, his brother Roy took full control of the Disney companies which continued to produce successful television, film, and stage entertainment.