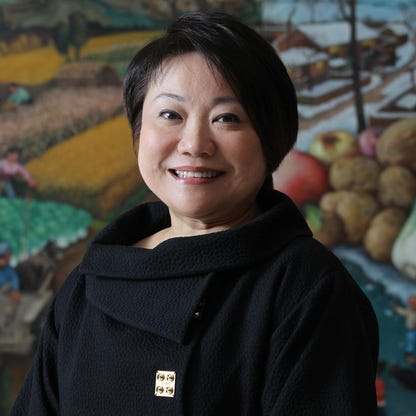 Vivian Chen is a Hong Kong businesswoman and entrepreneur who currently occupies a spot on the world’s billionaires list. She joined her father’s establishment, the Nan Fung Group in 1981 after completing a course at a design school in San Francisco. She took control of the said establishment in 2009 when her billionaire father was diagnosed with Alzheimer’s’ disease and has been very pivotal in the growth and popularity of the business, not just in Asia but across the globe as well.

Her real name is Vivian Chen, and she was born in China. She is the daughter of a filthy-rich businessman who founded and ran the Nan Fung Group.

She attended a design school in San Francisco, California, in the United States before moving back home to join her family’s business.

After completing her studies in California, Chen returned to her country to help her father. She served in various positions to the best of her capability, taking up several roles and being the hardworking child her family would look at and be proud of.

In 2009, when it was discovered that her father had Alzheimer’s’ disease, Chen stood up to the occasion and took over her father’s company, the Nan Fung Group which is specialized in several booming businesses, ranging from textile to real estate.

Controversies arose when her mother, Yang Foo-oi took legal action against her for a trust fund in December 2010 and lost the court case in 2016.

In 2014, Chen created a plan to expend $90 million on revitalizing the company’s original factory as part of their inventiveness to support emerging fashion businesses in Hong Kong.

Vivian Chen decided to leave the group in March 2016 and was appointed an honorary chairman without daily involvement with Nang Fung Group.

Aside from her family business, Chen has been buying commercial properties in several cities, most notably in Hong Kong and London.

The Nan Fung Group was founded by Vivian Chen’s father, Chen Din Hwa. It is a privately held group of businesses carrying on the industry of property development as its primary business in Greater China, including textiles, shipping, and financial services. It is also one of the largest property developers and leading privately-held developers in Hong Kong. The history of the group can be traced back to the year 1954 when Nan Fung Textiles Limited was started in Hong Kong by Ningbo-born businessman and entrepreneur, Chen Din Hwa as a small textile company. It was in 1965 that the Nan Fung Group started its first real estate project, and in 1978, it developed its first big private housing estate, the Nam Fung Sun Chuen, situated in Quarry Bay, Hong Kong.

Property development is the core business of the Nan Fung Group. The group entered the property development business earlier in the mid-1960s in Hong Kong by acquiring residential and commercial properties and then by land purchase for development. In the mid-1990s, the group started to invest in China’s property market, and starting in 2001, they have built projects in major Chinese cities such as Beijing, Shanghai, and Guangzhou. The group is also involved in various international projects either as an individual investor or as a joint venture partner in different major cities around the world. Furthermore, the Nan Fung Group diversifies in businesses in areas like property finance, property construction, property management, hotel, and the shipping industries.

Vivien Chen, the younger daughter of group founder Chen Din Hwa, became the Chairman of Nan Fung Group in 2009 when her father was diagnosed with Alzheimer’s disease. She controlled the company from this position until her resignation in 2014.

Vivien is still the controlling stakeholder of the company. She and serves as honorary chairman of the group, while her youngest daughter, Vanessa, occupies the seat of the managing director. Since February 2014, Antony Leung, the former Financial Secretary of Hong Kong, has been a part of Nan Fung as the group’s Chief Executive.

According to various online sources, Vivian Chen used to be married to a Chinese businessman. However, her relationship status at this time show’s that she’s divorced. There are suggestions that she has children, but their identities are shadowy at the moment.

The notable Hong Kong businesswoman and company chair, Vivian Chen, is said to be sitting on a net worth of $6 billion. She made her money from her time in the textile and real estate industry, particularly by taking over her father’s company when he was down with Alzheimer’s. Chen had been a part of the company since 1981, managing several roles and working in close connection with her father. Their company, Nan Fung, was started by Vivian’s father, Chen Din Hwa in 2954. The company was started as a small textile business but eventually branched out to include shipping and property management as its major business involvements.

Vivien is divorced. She enjoys a lavish life and spends her money on the things she enjoys. Back in 2014, she splashed $20 million on an 11-story office tower located at Canary Wharf in London, England. She reportedly owns several exotic cars, and many other properties in several cities in China, England, and the United States.