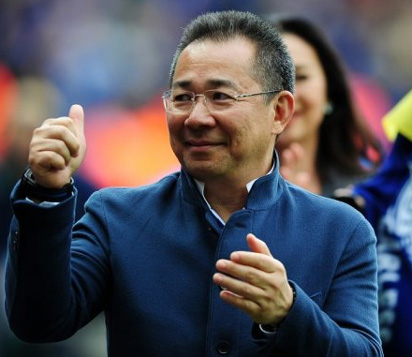 Thai businessman Vichai Srivaddhanaprabha will probably be most remembered for his association with Leicester City Football Club of the English Premier League. He bought the team in 2010 when they were still playing in the Championship for approximately $40 million and led them to emerge champions of England’s top-flight football within six years. It was an unbelievable and unexpected outcome, one of the most surprising accomplishments in football history.

Vichai founded King Power International in 1989 as an establishment responsible for managing duty-free shops in up to nine airports and started building his empire, which eventually led him to be ranked 388th on Forbes list of the world’s richest people.

A somewhat peculiar and amiable man, Vichai often traveled to football and other businesses by helicopter and was a devoted Buddhist who had attended live football games with Thai monks to bless the players and their stadium. Asides from owning Leicester FC, he also owned Oh Leuven of the Belgian second division. However, football wasn’t his only passion, as he was also a regular polo player and even brought a hundred horses to Sotogrande to participate in an international tournament.

The Thai billionaire businessman and founder, chairman, and owner of King Power International, unfortunately, passed away in a helicopter crash on October 27, 2018, near the King Power Stadium, leaving behind a legacy that the world will continue to remember for decades to come.

He was born in Thailand on 4 April 1958 into a Thai Chinese family. His father, Wiwat Raksriaksorn traces his origin to Zhao’an, Fujian, China.

As a young man, he studied in the United States and in Taiwan as well.

Vichai was best known as the founder and chief executive officer of King Power Duty Free, a company that operates duty-free shops in Thailand. In December 2009, his company received the royal warrant from the King of Thailand in a ceremony that Vichai himself attended. In October 2018, Forbes magazine named him the 5th richest person in Thailand.

The first football match he watched in the United Kingdom was the League Cup Final between Middlesbrough and Leicester City in 1997. It was this game that attracted him to the Leicester team which he eventually started to follow. In 2010, the Asia Football Investments group including Vichai and his first son Aiyawatt acquired Leicester City F.C which was then playing in the English Football League Championship. He became chairman of the club in 2011 while still occupying the position of owner. His son Aiyawatt became the franchise’s vice chairman. In July 2011, the club’s renamed its ground from Walkers Stadium to the King Power Stadium.

In May 2017, Vichai acquired another football club, OH Leuven in the Belgian second division and equally transformed this team to a first division side.

Vichai received an honorary doctorate from the University of Leicester in 2016. In April 2019, he was honored by The Asian Awards with the award of “Outstanding Contribution to the Community” Medal.

He won the English Premier League title with Leicester FC in 2016.

Vichai was married to his wife Aimon Srivaddhanaprabha for the most part of his lifetime. They had four children, including Aiyawatt, Aroonroong, Apichet, and Voramas.

He played polo in his spare time and was the owner of the VR Polo Club in Bangkok, Thailand.

On 27 October 2018, Vichai’s helicopter crashed near the King Power Stadium shortly after takeoff. The following day, it was confirmed that the businessman was one of all four occupants who had died in the crash. In accordance with Thai burial traditions, Vichai’s funeral lasted 8 days starting from the 3rd of November.

The late Thai businessman, Vichai Srivaddhanaprabha, had a net worth of $5 billion before his death in October 2018. He made his money as the founder, owner, and chief executive officer of King Power Duty Free which operates around Thailand.

Vichai was named the third-richest person in Thailand at the time of his death. His company generates more than $2 billion in annual revenue every year. He was notable internationally as the owner and chairperson of several professional sports teams. After paying roughly $40 million for Leicester City FC in 2010, he led the team to the biggest underdog victory in football history by clinching the Premier League title in 2016 and was revered as a god around Leicester City. His leadership also saw the valuation of the team jump from $50 million to $500 million and more than $1.5 billion in revenue, all within six years.

Vichai, who lived in Bangkok, Thailand with his family, was the founder of the Thailand Polo Association. His company, King Power Duty Free, has a monopoly on all retail operations at Suvarnabhumi and Don Muang airports in Bangkok. In addition, he also owned 4% of Thai airline Nok Air.

Yu Yong Net Worth, Career And Early Life
Next Article