Tony Robbins is a successful author, coach, motivational speaker, and philanthropist from the United States. He is known for his numerous seminars, infomercials, and self-help books. With that on our minds, it’s now time to gradually walk through all the details of Tony’s prosperous life and career.

Anthony Jay Robbins was born Anthony J. Mahavoric on February 29, 1960. The place of his birth was North Hollywood, California, in the United States of America. The eldest of three children, Tony’s parents divorced when he was 7. His mother remarried many more times, including a marriage with former semi-professional baseball player Jim Robbins, who legally adopted Tony when he was 12.

Tony has described his home life as “chaotic” and “abusive”. When he was age 17 he left home and never returned. He did not attend college but went on to work odd jobs to be able to fend for himself.

Starting from when he was 17 years old, Toby began promoting seminars for author and motivational speaker Jim Rohn when. In the early 1980s, Tony, a practitioner of Ericksonian hypnosis and neurolinguistic programming (NLP), partnered with NLP co-founder John Grinder. He was able to learn to firewalk and soon started involving it in his seminars. In 1988 Tony published his first infomercial. In 1997, he launched the Leadership Academy seminar.

Together with Cloé Madanes, Tony established the Robbins-Madanes Center for Intervention, aiming to train life skills coaches to help individuals and families deal with several issues such as addiction.

He holds multiple seminars every year, most of them with a “positive thinking” and “self-help” theme.

Tony has also played a number of remarkable roles in television and film. He has played cameo roles in a number of films and has also appeared in many TV shows, as well as documentaries.

In July 2010, NBC debuted the reality show “Breakthrough with Tony Robbins”, which followed Tony as he helped the participants of the show tackle their personal challenges. In April 2012, Tony began co-hosting the show “Oprah’s Lifeclass” on the OWN Network.

In 1991, Tony founded the Anthony Robbins Foundation with the aim of assisting the young, elderly, homeless, hungry, and less privileged people in the society, as well as the imprisoned. In 2014, the proceeds of his book, “Money: Master the Game” in addition to his personal funds were donated to provide meals to those in need through the Feeding America organization.

He works with a water corporation known as Spring Health, which provides fresh and clean, usable water to small villages in rural India to prevent waterborne diseases. To also add, Tony helped raise funds for the nonprofit organization Operation Underground Railroad to work with governments to help fight against child trafficking and slavery, with help from former Navy SEALs, CIA, and Special Ops operatives.

In 2014, Tony teamed up with other investors to acquire rights to develop a Major League Soccer franchise in Los Angeles, California, which is known as the Los Angeles Football Club. The soccer team started competing after four years. In 2016, he partnered with the co-owner of Golden State Warriors Peter Guber, and the co-owner of Washington Wizards Ted Leonsis to purchase an eSports professional gaming organization known as Team Liquid.

In 2017, his esports company, Team Liquid, won “The International 7”. This is a Dota 2 tournament with a reward pool of more than $24 million.

After meeting Rebecca “Becky” Jenkins at a seminar, Tony married her in 1984. She already had three children from two previous marriages, and Tony didn’t mind adopting them all. In 1998, however, Rebecca filed for divorce and left with her kids.

Tony has a son named Jairek Robbins, whom he fathered with former girlfriend Liz Acosta. Jairek is also a trainer and personal empowerment coach just like his father.

In October 2001, the public speaker found love again and decided to tie the nuptial knots with Bonnie “Sage” Robbins (née Humphrey). Ever since, they live together in Manalapan, Florida, U.S. 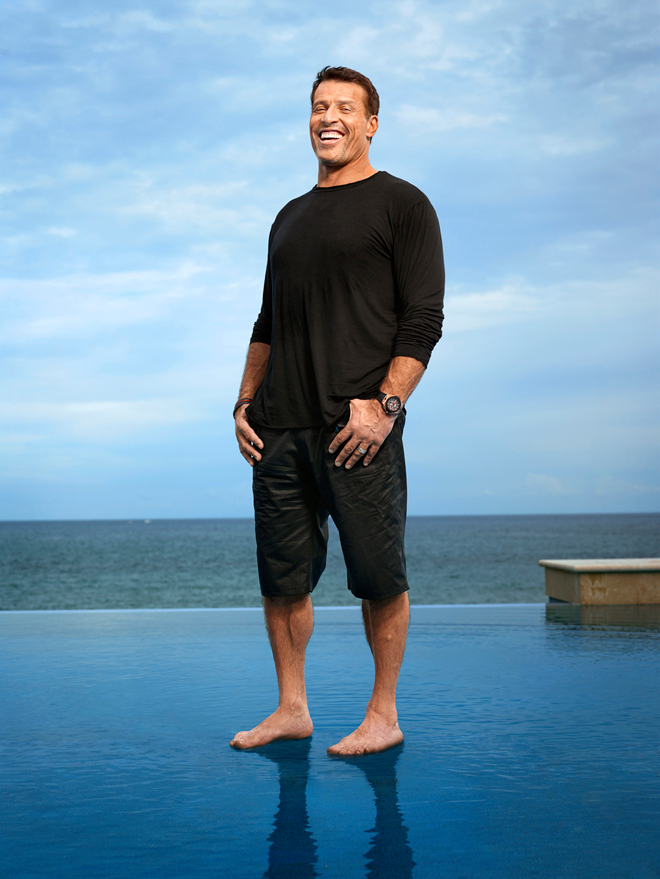 Tony has revealed that he was a vegan for twelve years but later added fish to his diet. Whilst eating a fish-filled diet he developed mercury poisoning and almost died. His diet now consists of mainly vegetables with a slight amount of animal protein.

Mr. Tony Robbins has achieved success in his career path. The American guru is a proven coach, actor, professional public speaker, and self-help author who has established himself in the public scene. After enduring a quite harsh and traumatic childhood, this dedicated and goal-oriented man rose to fame during the 80s mainly due to his infomercials that promoted seminars and self-help books. Today, it is said that he owns more than 30 companies in various industries, all of which reportedly combine to generate more than $1 billion in annual revenue.

Tony Robins’ net worth is pegged at $600 million dollars by Forbes Magazine. In more than a few instances, he has disclosed his earnings to the public, claiming that he made $40,000 in 1984 and more than $1 million the following year. According to him, he hasn’t earned less than a million dollars annually since then. In fact, by 1991, his companies were already generating combined revenue of $50 million per year. By 2005, Tony himself was earning north of $30 million in profits from his empire, every year. Several reports claim that earns over $10 million today from his “Unleash the Power Within” program alone. It has also been revealed that he takes $10,000 from every person that attends his seminars and also charges between $300,000 – $1 million for a private speech. He has been sought out by tons of the world’s most powerful people including Salesforce CEO Marc Benioff, former President Bill Clinton, and famous TV personality Oprah Winfrey, and mind you, his services don’t come cheaply.

Asides from having earned his wealth through a cosmic self-help empire that includes public speeches, private coaching, seminars, books, and more, Tony’s fortunes have also grown from his several investments and businesses, including multiple valuable real estate properties. Since 2013, the millionaire coach’s primary residence has been a splendid mansion in Lantana, Florida. He purchased the property for $24.75 million and advanced to spend $10 million in upgrading the nearly 16,000 square-foot house. He had previously been lived in La Jolla, California. In 2004, he spent $875,000 on a home in La Quinta, California, which he later sold in 2017 for $3.25 million. In Addition, Tony owns a 525-acre luxury resort called Namale in Fiji which he purchased for $12.5 million in 1989, at the age of 29. The resort today is said to be worth north of $50 million.

Arguably the most well-known life guru and wealth coach, Tony Robbins started out with nothing but has built a personal fortune that anyone would be proud of.