Ted Turner is the name of the man who founded the prestigious CNN, the world’s first-ever 24-hour cable news network. A notable media tycoon, he is also credited for founding the independent television channel WTBS which invented and popularized the concept of superstation in cable TV. Ted entered into the world of business earlier on in life. His father owned and managed an advertising company, and as a boy, he joined his father’s business and assisted in all the ways he could. Although his father was successful at the business and was able to cater for his family through it, he suffered from bipolar disorder and had extreme mood swings. Despite being financially secure, Ted had a difficult life during his childhood days. His father was physically abusive and finally committed suicide when Ted was 24. After the death of his father, Ted took over the business and completely immersed himself in work to manage his grief. His efforts were crowned with success and soon the business started fetching huge profits for the family. With the income he had accumulated within a short time, Ted Turner went on to acquire many more businesses and set up the Turner Broadcasting System, after which he founded CNN as the country’s first all-news television station. In addition to his business prowess, the mogul is also known for his philanthropic engagements, which includes a contribution of $1 billion to the United Nations with which the United Nations Foundation was created.

Robert Edward Turner III was the eldest child of successful American businessman and advertiser Robert Edward Turner Jr., and his wife Florence. He had to pass through a difficult childhood because his father, despite being wealthy, suffered from bipolar disorder and used to physically abuse him. When his father was enlisted to serve in the U.S. Navy during the Second World War, he took his wife and daughter along but abandoned Ted behind. He had to enroll at a boarding school in Cincinnati while his parents were away, and after their return from the war, he was enrolled at the Georgia Military Academy. In 1956, he joined Brown University for a major in economics. However, he was rusticated for having a woman in his dorm room.

After getting thrown out of Brown University, Ted Turner returned home to join his father’s Turner Advertising company, and his father appointed him the assistant manager of the company’s Atlanta branch. At that time, the company had taken massive debts and the pressure that came with the situation affected his father’s health. Suffering from bipolar disorder and incapable of managing the financial situation, Ted’s father killed himself in 1963 leaving a 24-year-old Ted in charge of the indebted company.

As he had very limited options, Ted threw himself to work to cope with his grief and also accomplish his ambitions. Soon the company, with Ted in control, the company was able to pay off its debts and eventually started registering profits.

By the late 1960s the company had grown a lot from dealing in radio stations, Ted Turner expanded into television and acquired a failing UHF station in Atlanta. He changed the name of his company from Turner Advertising to Turner Communications, and also renamed the station he recently acquired to WTCG. For a while, he ran cartoons and old movies on the station until the mid-1970s when FCC regulations started allowing cable television channels to transmit programs from remote stations. In 1976, the WTCG-TV station began to air sports specials, old movies, comedy reruns, and cartoons nationwide to subscribers. The channel’s viewership grew manifold and he soon had over two million subscribers and a fortune of $100 million.

By the late 1970s, he renamed WTCG as WTBS and changed the name of his company to Turner Broadcasting System. By now, he had also acquired the Atlanta Hawks and Atlanta Braves in order to provide programs for WTBS. He undertook his most ambitious venture by launching a 24-hour all-news channel in 1980. At that time many media professionals criticized this move but nothing changed Ted’s mind from starting the Cable News Network (CNN). Within the next five years, the network started earning huge profits and was expanded to include CNN International and CNN Radio. He also established multiple other businesses throughout the 1980s and 1990s, notably, Turner Classic Movies, Cartoon Network, Turner Network Television (TNT), and Turner Entertainment Co.

As we already mentioned in the first paragraph of this publication, Ted is also a philanthropist. He is the owner of two nonprofits, the Better World Society and Turner Foundation, which he founded in 1985 and 1990 respectively. While the Better World Society focuses on supporting nuclear disarmament, the Turner Foundation concentrates on activities in the environment. 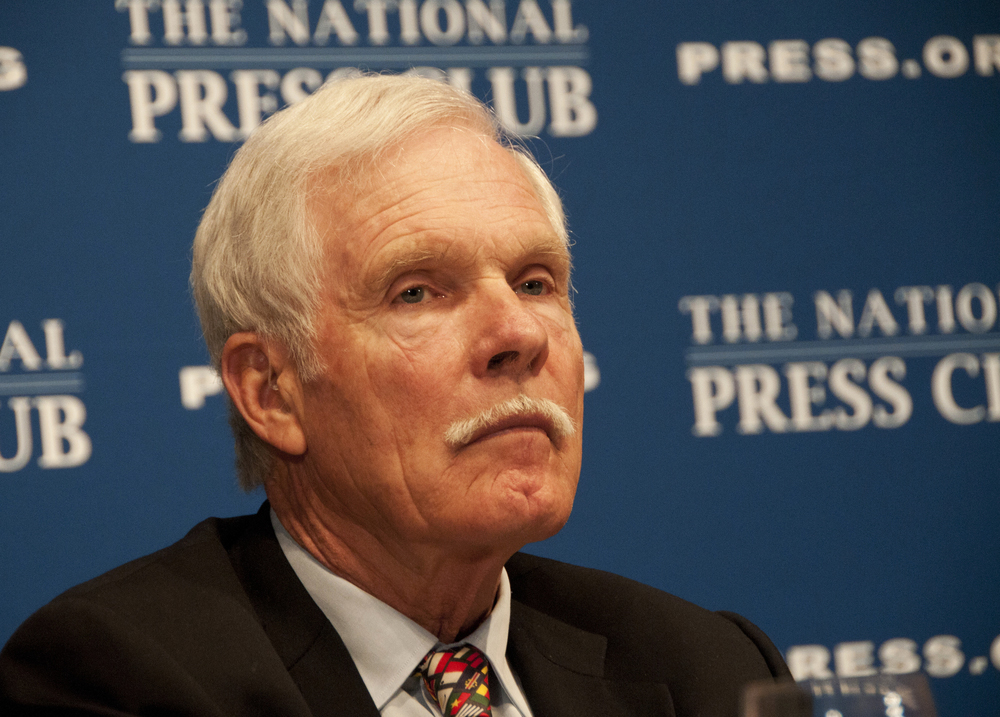 In 2010, he joined other philanthropists to sign Warren Buffet‘s The Giving Pledge, an agreement to donate the bulk of his fortune to charity.

As culled from this source, Ted Turner’s awards and titles include:

In 2006, the Franklin Institute recognized him with the Bower Award for Business Leadership.

For four years until 1964, Turner was married to Judy Nye, his first wife. He later married Jane Shirley Smith in 1965 but divorced her in 1988. In his third marriage, the media magnate wedded American actress Jane Fonda in the year 1991. However, their relationship lasted ten years and they divorced in 2001.

He has a total of five children from all his marriages.

As the founder of news broadcast giant CNN, Ted Turner’s net worth is roughly $3 billion as we write this.

Safe to say that he has come a long way in life. From an abused child to an Account Executive at the ‘Turner Advertising Company’, Ted has seen it all on his journey to success. He achieved career success by moving into the television business in the 1970s and later setting up a chain of business ventures alongside CNN, including New Line Cinema, Castle Rock entertainment, and several other initiatives which are responsible for his wealth today.