Susan Wojcicki is a technology executive who currently serves as the Chief Executive Officer of the world-famous video-sharing platform, YouTube. Susan started her career by occupying the position of management consultant in Bain & Company and R.B. Webber & Company after completing her master’s in Business Administration from University of California Los Angeles’  Anderson School of Management and a master’s degree  from University of California. She also worked at Intel in its marketing unit. She then joined Google and became the first marketing manager of the company, and her contributions helped her climb through several rungs up the ladder of her career to become Senior Vice President of Commerce and Advertising. Two of the largest acquisitions of Google, namely YouTube and DoubleClick were handed under her management. In 2017, Susan was ranked 6th on Forbes ‘World’s 100 Most Powerful Women’ list. In addition to being a tech executive, this gorgeous CEO also supports several social causes like expansion of paid parental leave, Syrian refugee crisis, opposing gender bias in tech companies, prioritizing coding in school, and many others. She is one of the most influential women alive today and the world needs to know about her.

Susan Diane Wojcicki was born in Santa Clara County, California, United States on July 5, 1968. While her mother Esther Wojcicki worked as an educator and journalist, her father worked at Stanford University in California as a physics professor. Her mother was also the Vice Chairperson of Creative Commons advisory council. She has two sisters – Anne Wojcicki, an entrepreneur and Chief Executive Officer of the California based biotech and personal genomics firm ‘23andMe’, Janet Wojcicki, an anthropologist and epidemiologist that work with the University of California.

Susan studied at Gunn High School in Palo Alto, California, where she wrote for the school’s newspaper. In 1986, she registered at Harvard University and graduated in 1990 with a major in literature and history. Initially, she wanted to have a career in academics and moved to obtain a PhD in economics. However, she changed her intentions after coming across technology. She obtained a master’s degree in economics from the University of California in Santa Cruz in the year 1993. In 1998, she earned her second master’s degree, graduating from the UCLA Anderson School of Management with a master’s in Business Administration. 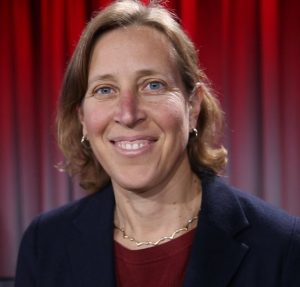 After completing her studies, she worked with several firms before making it big. She worked at R.B. Webber & Company, the Bain & Company global management, and also at the management department of Intel Corporation. In 1999, she was employed by Google as the company’s 16th employee, and was installed as its first marketing manager.

While working in her position as the marketing manager of Google, Susan Wojcicki developed and worked on many features, including the Google Images, Google Doodle, and Google Books. Her consistency earned her the position of senior vice president of advertising and commerce at the company, and she handled many special features that today’s internet marketing relies  on, including Google Adsense, Double Click, Google AdWords, and Google Analytics.

Due to YouTube’s rise in popularity and the fierce competition it provided against the Google video service, Susan Wojcicki handled its acquisition for $1.65 billion in 2006, and acquired DoubleClick for $3.1 billion the following year.

In 2014, she was named as Chief executive Officer of YouTube. In her position, she worked on many developments in the YouTube app, modifying its design and enhancing several important features. She also oversaw the introduction of YouTube – TV feature, which is now believed to contribute to YouTube’s record of more than 5 billion daily watched videos, and more than 1.5 billion monthly logged in users.

On August 23, 1998, Susan Wojcicki tied the knot with Dennis Troper in Belmont, California. A mother of five, she has remained a staunch advocate of paid parental leave. She has been candid about the vitality of maintaining a balance between family and work life.

As the chief executive officer of the most popular video streaming and sharing website in the world Susan Wojcicki net worth is $550 million. Interestingly, she amassed her hundreds of millions by being steadfast in all the jobs she found herself doing since she graduated from the University of California. She started working at various divisions for several companies before finding her way to Google in 1999, and her life changed for good.

Today, Susan has risen through the ranks at Google to become the CEO of YouTube after serving the company in various strategic positions where she performed flawlessly. She is an inspiration for many younger women around the world, and her success story will be told for many more generations after her.