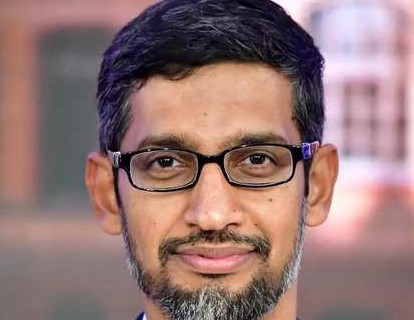 Sundar Pichai is an Indian-American businessman. At present, he is the Chief Executive Officer of Alphabet Inc, the parent company that owns Google. He replaced the company’s co-founder Larry Page as Chief Executive Officer on December 3, 2019. At the same time, both founders of the company Sergey Brin and Larry Page announced they were withdrawing from day-to-day work at the company, although they remain key members of the Alphabet company’s Board and the largest shareholders. Sundar Pichai net worth has come from earnings received for occupying and managing offices at different strategic positions in the tech industry. Before being named Chief Executive Officer at the company, Sundar Pichai was the product chief. His new position came as a part of the rebuilding process which made Alphabet Inc. the umbrella company of Google. It has also been a subject of argument that the re-arrangement allowed founders Sergey and Larry to withdraw as the key representatives of Google as the company is embroiled in a stream of anti-trust investigations from the Justice Department, the FTC and dozens of Attorneys General.

Sundar Pichai was born in July 1972, in Madurai, Tamil Nadu, India. He graduated from Indian Institute of Technology and obtained his M.S. from Stanford University before attending Wharton School of the University of Pennsylvania for his MBA. After rounding up his academic pursuit, he found employment at Applied Materials in product management and engineering, and also worked at McKinsey & Company in management consulting. 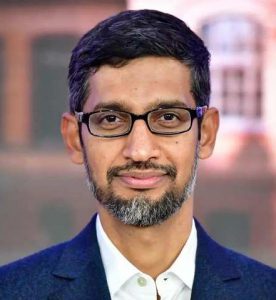 In 2004, he made an important decision in his life when he joined Google and was a part of the teams that worked on several projects including Google Maps, Gmail, Google Drive, Chrome OS, and Google Chrome. In 2013, Android was included to the projects he oversaw and he was at one point rumored to be running for the position Chief Executive Officer  of Microsoft.

Pichai initially nursed the idea of establishing Google’s own web browser and worked towards it until it was finally launched in 2008. Google Chrome was a major success, and this was Sundar’s first step to international recognition. In the same year, he was promoted to the role of Vice President of Product Development. His rise through the ranks increased steadily, and he went from being just a team member at Google to being the Senior Vice President of Chrome and other apps in 2012, just eight years after he got into the company.

Upon the departure of Andy Rubin the creator of Android, Pichai’s promotion to the position of head the Android department took place. Following strings of stellar performances, he earned another promotion in 2014, becoming the Product Chief. He also served as the director of Jive Software for a two-year period from 2011 to 2013.

On 10 August 2015, Sundar Pichai was picked to become the next Chief Executive Officer of Google. He stepped into the position when Alphabet Inc. was created as the holding company for Google. Interestingly, in the same year, Sundar had been a contender for the position of Chief Executive Officer at Microsoft. However, the job was offered to Satya Nadella and Pichai remained with Google till date.

Sundar is credited with creating and founding the Google Chrome internet browser, and it seems to be one of his biggest achievements. His product, Google Chrome, has become a staple in all computers and internet-enabled mobile devices all over the world, outshining formerly prominent web browsers like Mozilla Firefox and Internet Explorer. He has also had the opportunity to receive numerous accolades for his leadership and management skills, and for his innovations, he has accomplished so well to become internationally famous in the world today.

Sundar Pichai has been married to Anjali Pichai for many years now, and they live happily together with their two young children.

Despite being know world-over as a businessman and executive at Google which is one of the biggest companies on the planet, this CEO prefers to maintain a quiet and peaceful life, and would rather spend his spare time with his wife and children instead of appear publicly or in the media for anything.

This Indian business executive has been able to amass his fortune from earnings received for occupying and managing offices at different strategic positions in the tech industry. A huge portion of his accumulated wealth is because of the shares which he holds in the Google company. It is reported that when he assumed the position of Chief Executive Officer, he was handed a total of 273,328 shares. In 2016, it is public knowledge that he earned a salary of $200 million. His base salary is about $2 million, though in recent times he reportedly earned north of $100 million when stock grants and other bonuses are taken into account.

Sundar Pichai net worth is a staggering $1 billion. Through hard work and perseverance, he moved from working at Applied Materials in product management and engineering, and also at McKinsey & Company in management consulting, to joining the Google team where he swiftly moved up the ranks, and has now become the company’s Chief Executive Officer after sixteen years of working in the bowels of the tech company.

Sundar Pichai utilizes his vast wealth in making the world a better place, especially for the less privileged. His philanthropic efforts are numerous. It is indeed inspiring to read this story of a boy from Chennai, India who grew up to become the billionaire CEO of one of the largest companies in the world.