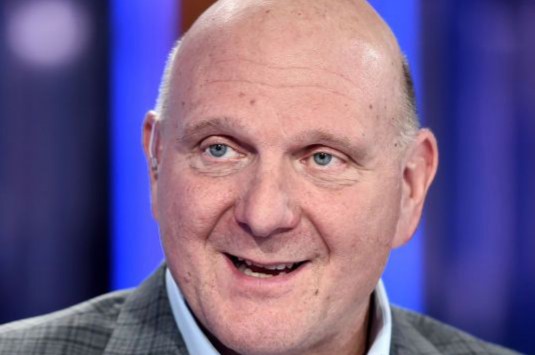 Steve Ballmer is an American businessman and investor. He was the Chief Executive Officer of Microsoft for years starting from January 2000 until February 2014. Prior to becoming the CEO, Ballmer occupied several high profile positions at the company, heading several units including sales and support, operations, and operating systems development. He had also served as the President of Microsoft, and Executive Vice President, Sales and Support. As a college friend of Microsoft co-founder Bill Gates, Steve was one of the first people to be employed by the company. He was the first business manager that was employed by Gates. Born into a very rich and influential family, Steve Ballmer grew up well catered for. He was exceptionally brilliant as a student and had extraordinary skills in mathematics. After graduating from Harvard College, he joined Procter & Gamble where he worked for a brief time before enrolling into the Stanford Graduate School of Business. He then dropped out without completing his studies so as to join his friend Bill Gates’ new company. Steve Ballmer’s presence at Microsoft led the company to witness phenomenal success, and after a memorable career, he retired from Microsoft and ventured into other businesses, such as investing in the Los Angeles Clippers basketball team of the National Basketball Association (NBA).

Steven Anthony Ballmer was born in Detroit, United States on March 24, 1956, in the family of Frederic Henry Ballmer and Beatrice Dworkin. He has a sister named Shelly. Steve’s father worked at Ford Motor Company, serving as a manager, and was paid high enough to be able to provide anything needed by his children.

For his education, Steve Ballmer graduated with a flawless score of 800 on the mathematical section of the SAT from Detroit Country Day School on a scholarship. He then moved to Harvard College from where he graduated in 1977 with an A.B. in applied mathematics and economics. While studying there he met Bill Gates as a fellow student, and the two became close friends. He loved sports, and served as the manager of the Harvard Crimson football team. He also worked for the Harvard Advocate and also The Harvard Crimson newspaper briefly.

After completing his studies from Harvard University in 1977, Steve Ballmer found a position at Procter & Gamble where he worked as an assistant product manager. He left the job in 1979 and enrolled in Stanford Graduate School of Business the following year, only to dropout after being called up by Bill Gates to join Microsoft. When the company was established in 1981, Ballmer owned 8% of the company. 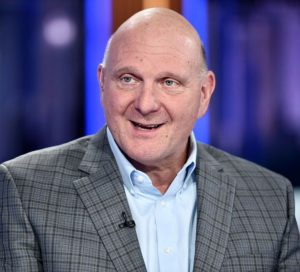 Steve Ballmer sold his shares of the Microsoft Company, worth about $955 million and kept just 4% of his ownership. In 1992, he was promoted to the position of the company’s sales and support department’s executive vice president. He was an important figure in the development of Microsoft’s .NET Framework. He served as president of the company from 1998 to 2001 and was made chief executive officer in 2000. As chief executive officer, Steve Ballmer led the company to greater heights, and the revenue of Microsoft multiplied from $25 billion to $70 billion.

Steve Ballmer retired as chief executive officer in 2014, and moved on to other things. He served as general partner and director of Accenture for five years starting from 2001. In 2014, he made a major investment by purchasing the basketball franchise Los Angeles Clippers from Donald Sterling for a whooping $2 billion. After purchasing the team, he continued to show his loyalty to Microsoft by banning the team from using Apple computers and phones.

In 2011, Ballmer was conferred as Knight of the Legion of Honor by French President Nicolas Sarkozy. He won the Media Person of the year 2009 Award at the Cannes International Advertising. In 2015, the L.A Polic Foundation honored him with an award for his contributions in the city, and The Boys & Girls Clubs of America awarded him Champion of Youth Award in 2008.

Steve Ballmer has been married to Connie Synder since 1990. The couple are blessed with three sons, including Peter Ballmer, Sam Ballmer, and Aaron Ballmer. Just like he did with his basketball team, Ballmer has also bared his family from using Apple devices.

As a philanthropist, Mr. Ballmer has donated millions to several organizations. Some of his most notable donations include – a $50 million donation to the University of Oregon in 2014, and a donation of $10 million to Harvard University in 1994 along with Bill Gates. Ballmer established the non-profit organization USAFacts.org in 2017, and currently serves as chairman of the Jewish National Fund.

As at this time, Steve Ballmer net worth is estimated to be more $76 billion, all made from his successful accomplishments across the fields of businesses and investments. The vast majority of his huge fortune is gotten from his 333.3 million shares of Microsoft. Over the past years he has sold stock worth $3.4 billion, and has collected about $4.5 billion from dividends. In 1980, Bill Gates employed him as Microsoft’s Business Manager and handed him a payment package that included an 8% ownership stake in the company, and annual salary of $50,000a. The company incorporated the following year in 1981, and Mr. Ballmer’s stock skyrocketed in value. As a result, he became the second person to become a billionaire based on stocks for a company that he didn’t establish himself.

During his tenure at Microsoft as chief executive officer, Ballmer’s total salary amounted to approximately $1.275 million. He has held several vital positions in Microsoft and was well paid for his services at the company. Following a highly successful career, Steve Ballmer is now one of the world’s richest people as of today. He is currently on the list of the top 10 wealthiest men in the world according to Forbes, and his involvement in several business ventures till date, such as his ownership of the basketball franchise Los Angeles Clippers will definitely do well to continually increase his fortunes in the next few years.