Satya Nadella is the name an Indian-American business executive who is best known to be the chief executive officer (CEO) of Microsoft. Before succeeding Steve Ballmer in 2014 to become chief executive officer, Nadella served as the executive vice president of the Microsoft company’s cloud and enterprise group, in charge of building and running the computing platforms of the company. As you read further, you will get to know more about Satya Nadella’s biography and his life accomplishments, courtesy of his successful career in the field of business.

Satya Narayana Nadella was born into a Telugu Hindu family in Telangana , India, on 19 August 1967. His father, Bukkapuram Nadella Yugandhar, served aas an Indian Administrative Service officer of the batch of 1962, while his mother,  Prabhavati, worked as a Sanskrit lecturer. His parents migrated from Nadella village to Bukkapuram in the district of Anantapuramu, Andhra Pradesh , and later to Hyderabad.

Growing up, Satya Nadella attended Begumpet, a Hyderabad Public School. He then attended the Manipal Institute of Technology in Karnataka where he earned a bachelor’s degree in electrical engineering in 1988. Following this, he moved to the United States to study computer science at the University of Wisconsin, from where he received a master’s degree in 1990. He then attended the University of Chicago Booth School of Business, bagging an MBA in 1996. 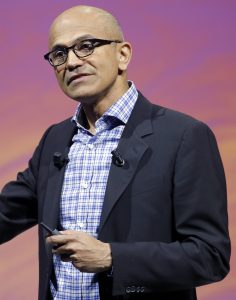 Satya Nadella is well known for his pioneering leadership, which has unmistakably increased his company’s stocks by nearly 60% in the years following his appointment as Microsoft’s chief executive officer. Ever since he joined the company in the year 1992, Nadella has been involved in various technological developments within the Microsoft company, and has been credited for spearheading Microsoft’s shift to cloud computing from customer-oriented services. Thanks to him, Microsoft now has the biggest cloud computing service in the entire world. Serving in several positions such as the Vice President of Research and Development & Microsoft’s Cloud and Enterprise Group, among others, he finally became got appointed as the chief executive officer  of Microsoft in 2014.

Now regarded as one of the most influential and respected people in the world, Satya Nadella keeps up his dream of making the Microsoft company the most learning and growth-focused company in the world as contrasting to the corporate giant that it has  been known to be up to now. Since his appointment, Microsoft has procured multi-billion-dollar companies, like LinkedIn, Xamarin, and Mojang, and has expressed interest in working with rival companies like Dropbox, Apple Inc., and IBM.

Satya Nadella’s 2017 book titled ‘Hit Refresh’ centers on his life experiences and association with Microsoft, and how tech is not only a driving power in the present world but will continue to shape it in the future.

Satya Nadella was honored in 2014 by CNN-IBN with the Indian of the Year Global Indian honor. In 2015, Barack Obama presented him with the prestigious ‘Champions of Change’ honor for his impressive work that effectively changed his company’s perception.

Satya is a married man and proud father to two daughters and a son. Since 1992, he has been married to Anupama Nadella. His wife is the daughter of his father’s friend. The family resides in the Bellevue, Washington.

The CEO has been widely criticized on the internet; especially after his comments on the hike of salaries for female employees appeared as biased against women.

When he is not occupied with his business commitments, Satya Nadella likes to wind down by reading poetry. He is also very fond of cricket and credits the sport as one of the reasons for his leadership abilities. All the proceeds from the sale of his 2017 book titled ‘Hit Refresh’ will be donated to Microsoft charities.

His journey from a hopeful student from India to being the chief executive officer of one of the world’s leading technology company is nothing but of a dream come true. His current position at Microsoft as well as the positions he held before has done so well for him in terms of adding to his fortune. In 2013, Satya earned a salary of $669,000 and additional $17.6 million compensation in form of stock options. In 2014, his total compensation was about $40 million. Between 2015 and 2017, he earned an extra $20 million annually in salary and bonus. In 2019 he earned a total of $42 million, made up of a muddle up of stock options, base salary, and other performance-based incentives.

As of this writing, according to the Microsoft’s most recent SEC filings, the CEO owns nearly 800 thousand shares of the company which has a value of $120 million. He previously owned a over 1 million shares but he sold about 30% of his stake in the year 2018 for a one-time gain of $25 million.

Satya Nadella net worth is a total of $387 million, a fortune that he has amassed with sheer intellect and hard work. When he was first appointed chief executive officer of Microsoft, the company had a market cap of $300 billion. Over the next five years he grew the market cap of the company to more than $1 trillion for a period and without fail over $850 billion. This is by all means, a truly remarkable feat for any leading figure of any company to achieve.