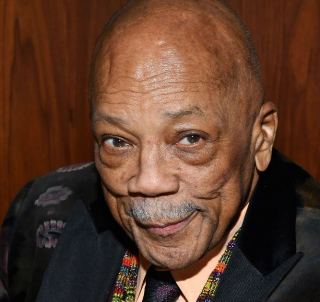 Quincy Jones net worth is the result of his lifelong involvement in the music and entertainment industry. He is a multifaceted celebrity who has achieved fame as a record producer, songwriter, jazz trumpeter, composer, film and television producer, conductor, arranger, and instrumentalist. His profound passion for music was evident to his family starting from his early days as a young boy growing up in the neighborhoods of Chicago. It was his teenage friend, musician Ray Charles, who convinced him to pursue music as a professional.

Jones and his talent with trumpet and amazing composing abilities earned a scholarship to Berklee College of Music, Boston. He dropped out from college along the line and ventured into freelancing. After composing a song for Barclay Records in Paris, France, he started composing music for a number of top artists and records in the industry. Having gained quality experience, he formed his own companies, Jones Entertainment and Qwest Productions, through which he composed and arranged for many movies and television companies, and for artists like Frank Sinatra and Michael Jackson.

Quincy Delight Jones, Jr., was born in Chicago to Quincy Delight Jones, Sr. and Sarah Frances. His father was a semi-professional baseball player and carpenter and mother was a bank officer and apartment complex manager. When Jones was young, his mother suffered from schizophrenia and was admitted to mental hospital, which is why his father took a divorce from her and remarried. The whole family moved to Washington after that.

He attended the Garfield High School in Seattle and was involved in music all through his high school. He formed a band with his fellow schoolmates and won a scholarship to Berklee College of Music, Boston in 1951. He left studies in between and set off on a tour with a band as a trumpeter and from there on his professional musical career started. He moved to New York City and started doing freelance. 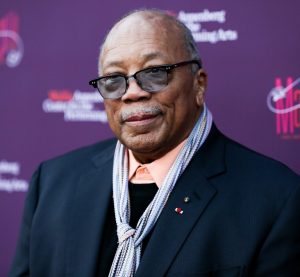 At 19 years of age, Quincy joined jazz leader Lionel Hampton on tour around Europe. He went on another tour with a member of Dizzy Gillespie to the Middle East and South America. After studying music composition in Paris, France, he joined several jazz orchestras and touted around Europe before forming his own band, “The Jones Band”. The band toured Europe and North America but soon disbanded due to poor finances.

In 1964, he became the vice president of Mercury Records. He became the first black person to be promoted to that position. He was invited to compose a song for the 1964 film “The Pawnbroker”. The film was a huge success, and this inspired him to carry on with music composition. He left Mercury Records and relocated to Los Angeles to pursue a vibrant career in music composition. He composed the scores for Mirage and The Slender Thread in 1965, and also composed soundtracks for several other films, including “Cactus Flower”, “The Deadly Affair”, and “In the Heat of the Night”. Not only did he work as a composer, but he also organized scores for many notable artists, including Peggy Lee, Frank Sinatra, and Shirley Hong.

In 1975, Quincy Jones established the production company, Qwest Productions, under which he produced several albums. He produced albums for famous names including Frank Sinatra and Michael Jackson. He is credited as the producer of Michael Jackson’s “Off the Wall” album. Following the success of the album, Jones became the highest-ranking producer of that era. He has also been seen in a few films including “Fantasia” in 2000.

Jones is the most Grammy-nominated artist in history, with 27 wins from 79 nominations. He has also racked up a Grammy’s Legend Award, a BET Humanitarian Award, and John F. Kennedy Centre Honors. He has also been inducted into California Hall of Fame and also the Rock N’ Roll Hall of Fame.

Quincy tied the knot with Jeri Caldwell in 1957. They had a daughter called Jolie Jones before they separated in 1966. He married Ulla Anderson in 1967. Their marriage which lasted seven years, produced two children before they called it quit in 1974. Again in the same year, he married American actress Peggy Lipton, and divorced her after two kids in 1990. He also has two more children from brief relationships, making it a total of seven children for the legendary music maker.

Quincy Jones, now 87 years old, has a height of 169cm and weighs 83kg. He is a notable philanthropist who besides giving the world the humanitarian anthem titled ‘We Are The World’, has also founded a charity called Quincy Jones Listen Up Foundation which aims at assisting the less privileged.

Jones has made a massive fortune through his music career. His performances as a record producer, composer, and arranger has earned him much fame and wealth. Apart from music, he also earned several movie credits including “The Gateway”, “The Anderson Tapes”, “The Italian Job”, “In Cold Blood”, “In Cold Blood”, “Walk”, and “Don’t Run”. The veteran also makes money from endorsements and promotion deals as his profile lures many brands.

Quincy Jones net worth is estimated at $450 million