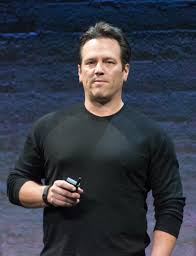 Phil Spencer is an American business executive. He is executive vice president of Gaming at Microsoft and is best known as the head of Xbox brand.  Phil leads the global creative and engineering teams responsible for gaming at Microsoft. He has been with Microsoft since 1988 and has grown through the ranks, leading various initiatives at the organization. Phil Spencer net worth is estimated at $25 million.

He was born on January 12, 1968 at Ridgefield, Washington, United States of America. Phil is 52 years old and attended the University of Washington, where he graduated with a bachelor’s degree.

Spencer’s career with Microsoft started in 1988 as an intern. He has grown through the ranks and taken up a number of technical roles before his current one. He led the development of Microsoft’s first CD-ROM-based titles (such as Encarta). Phil was the development manager for Microsoft Money, and also the general manager of Microsoft’s online and offline consumer productivity products including Microsoft Works and Microsoft Picture It!

In 2014, he was designated to lead the Xbox, Xbox Live, Groove Music and Movies & TV teams, and Microsoft Studios.

In September 2017, he was promoted to Executive Vice President of Gaming, reporting directly to CEO Satya Nadella. This new role also made him a member of the Senior Leadership Team.

Since taking up the role of leading the Xbox and Gaming division, he has been an advocate for cross-platform play, and has also launched key initiatives like reintroducing backward compatibility to the Xbox platform, the further development and support of Minecraft, the purchase of Mojang, the introduction of Xbox Game Pass, launching the Xbox Adaptive Controller, the launch of xCloud, an increased focus on PC gaming, support of the Nintendo Switch and increasing the number of first-party development studios.

Spencer with his team and development partners continue to be innovative, pushing the boundaries of creativity, technical innovation and fun across gaming genres, audiences and devices.

He is not only a seasoned gaming executive with more than 15 years experience in the gaming industry but also a passionate gamer.

He got married to his high school sweet heart and they live together with their two daughters in Seattle. Spencer currently serves on the board of Entertainment Software Association and of The Paley Center for Media.

Phil Spencer is currently the executive vice president of Gaming at Microsoft and on this role leads the global creative and engineering teams responsible for gaming at Microsoft. He is also a member of the Senior Leadership Team.

He reportedly earns about $1.4 million in salaries annually on his current role.

Phil Spencer net worth is currently estimated at $25 million.