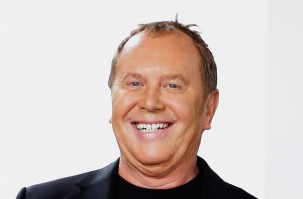 Michael David Kors is a millionaire fashion designer whose brand, Michael Kors, sells men and women’s clothing, fragrance, accessories, footwears, jewelry, and watches. He is currently the chief creative officer and honorary chairman of this brand which in January 2019, changed its name from Michael Kors Holdings Limited to Capri Holdings Limited (NYSE: CPRI). Michael Kors, Versace, and Jimmy Choo are the 3 founder-led brands currently under Capri Holdings Limited. The remainder of this properly documented article contains Michael Kors’ biography, businesses and current financial data, as well as many other aspects of his industrious life and career.

Kors was born Karl Anderson Jr. in Long Island, on August 9, 1959. He was born to former model Joan Hamburger and Karl Anderson Sr. who was still in college when he married his wife. Michael is of Swedish and Jewish descents. Several issues forced his parents to divorce when he was still a young child, and his mother had to get married to another man named Bill Kors, and the young Karl was given new names.

Starting from his childhood days, Michael was always inclined towards fashion and design. He even designed his mother’s wedding dress when she remarried. During his teenage years, he designed clothes which he sold from his parents’ basement under the brand name, ‘Iron Butterfly’. He was raised in Merrick, New York, and attended John F Kennedy High School, in Bellmore. He attended acting lessons briefly before deciding to dedicate his attention on fashion designing. After nine months of attending the Fashion Institute of Technology in New York, Kors dropped out and started working at Lothar’s boutique as a salesman before later getting promoted to the role of the store’s visual display head.

Kors started designing during his teenage years. He sold the clothes he made from his parents’ basement in the beginning of his illustrious career. He eventually found work as a salesman at a boutique after dropping out from Ney York’s Fashion Institute of Technology. After showing his loyalty and ability to contribute to the growth of their business, Lothar’s Boutique where Michael worked promoted him to the role of fashion designer and visual display head for the store. Dawn Mello who was the fashion director of Bergdorf Goodman, fell in love with Michael’s work and asked that he displays his collection to Bergdorf’s buyers.

In 1981, Kors launched his Michael Kors women’s line at stores including Goodman, Saks Fifth Avenue, Neiman Marcus, Bloomingdale’s, and Lord & Taylor.. The company launched the KORS label as a licensee nine years later. In 1993, Mike filed for Chapter 11 bankruptcy but was able to scrabble his way back, however he had to close the licensing deal for his label, forcing him to stop production on his KORS brand.

In 1997, Michael Kors launched a cheaper, ready to wear brand for French store Celine. He left the Celine brand a few years later and launched a menswear line in 2002. Two years later, he launched the MICHAEL Michael Kors line, combining with the original Michael Kors Collection brand. The line included men and women’s ready to wear apparel and soon expanded to shoes and handbags. By the end of the year 2016, Michael Kors had more than 770 Lifestyle stores across the world and Collection boutiques in Southampton,  Palm Beach, Chicago, New York, and Beverly Hills.

In 2003, he sold a part of his company to investors Lawrence Stroll and Silas Chou for around $100 million, leaving him with ownership of just around 5% of his company which is said to be worth $10 billion. Today he serves as the Chief Creative Officer as well as the Honorary Chairman for Michael Kors Holdings. In 2017, the company acquired Jimmy Choo for nearly $1 billion, and bought Versace in 2018 for $2.1 billion. In January 2019, Michael Kors Holdings Limited changed its name to Capri Holdings Limited, combining with two other companies Jimmy Choo and Versace to operate  under Capri Holdings Limited.

Outside of designing clothes, Michael Kors served as a judge on “Project Runway” for 5 seasons.

On 16 August 2011, Michael Kors married his long-time lover Lance Le Pere in The Hamptons. The lovers met in 1990 when La Pere joined Kors’ company as an intern.

Michael Kors net worth is $600 million dollars, all made from his lifelong career of being a fashion designer who has happened to dress many rich and famous women. He would have worth more, but dropped from his position as a billionaire in the early 2010s when his company’s worth dropped by over 50%. He has been happily married to his long term partner named Lance, and the couple currently live together in Kors’ mansion in Greenwich Village, New York.

By all means, this man has achieved so much through his beloved profession of designing. He is wealthy today after serving the industry for more than five decades. He is now ranked as one of the greatest fashion designers in the world, and also has a place among the richest fashion designers known today. Michael Kors is truly an inspiration for the younger generation, and his journey from a boy who sold his designs from the apartment of his parents to a leading professional known all over the world is a story that fuel’s an aspiring entrepreneurs passion to keep on working hard and never give up no matter what.