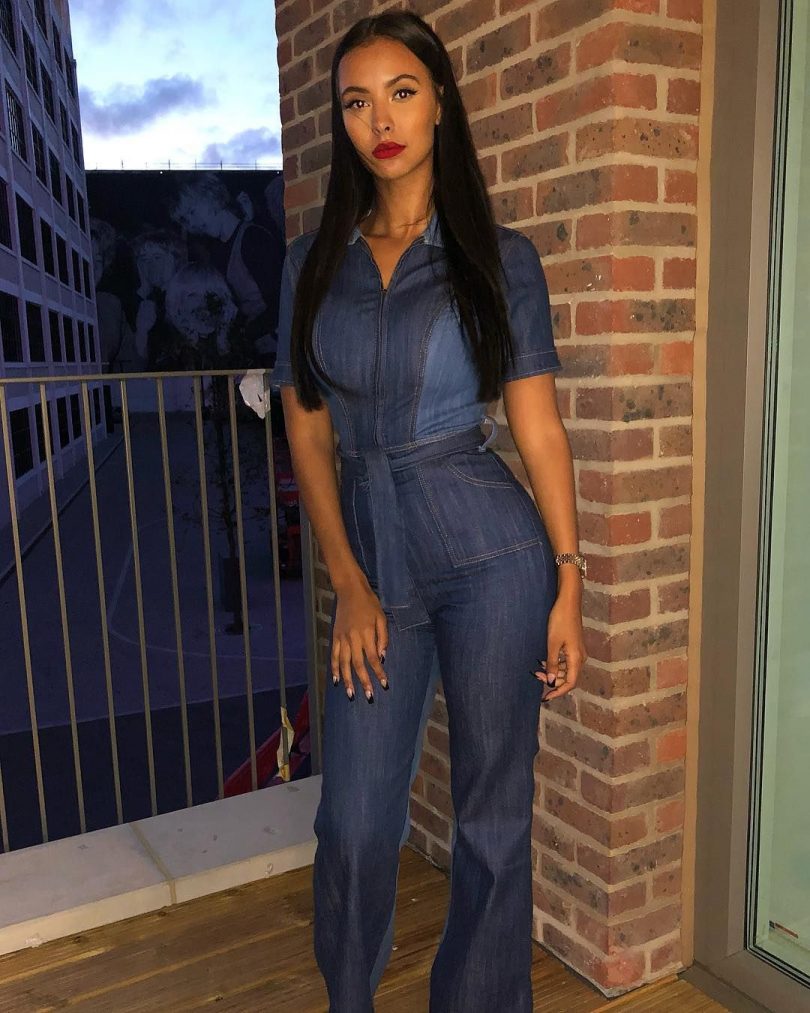 This is an article on the biography and financial situation of Maya Jama, a famous British television and radio presenter who has risen to prominence for many constructive reasons. Born and raised in Bristol, England, Maya moved to the country’s capital at 16 to pursue a career in the entertainment industry. Since her debut, she has taken charge of many television and radio shows as a presenter and contributor. She has co-presented ‘Cannonball’ on ITV in 2017, ‘Trending Live!’ on 4Music from 2015 until 2017, the first series of ‘The Circle’ on Channel 4 along with Alice Levine, and the MTV show ‘True Love or True Lies’ alongside Dani Dyer. Maya was the presenter of a BBC Radio 1 show that aired on Fridays and Saturdays 10:00 am–1:00 pm GMT. She also co-hosted the BBC One show ‘Peter Crouch: Save Our Summer’ during the 2020 COVID-19 lockdown. Without further ado, let’s glance through the life and success story of Maya Jama, including information on her personal life, relationship, accomplishments, and current net worth.

Maya Indea Jama was born on 14 August 1994 in Bristol, England. She is of Swedish descent on her mother’s side and Somali descent on her father’s side. Her mother, Saide, was 18 years old when she gave birth to Jama who her parents named after renowned American author and poet Maya Angelou. Maya’s brother’s name is Omar.

For most of her childhood, her father was in prison for violence like pub brawls and public fights. Aged 12, Maya decided to stop going to visit her father in prison and blocked him from her thoughts for a decade.

Maya attended Cotham School in Bristol. When she was 16, she moved to London to start a media career, initially as an actress, then as a television presenter and then as a fashion model. She remains close to her mother and occasionally appears with her on talk shows and private celebrity events. Acting had been her first ambition, but she realized, promptly and accurately, that becoming a presenter might just suit her better. Her role models included June Sarpong, the broadcaster and the director of creative diversity for the BBC, and Davina McCall.

Now an actress, television personality and radio presenter, Maya Jama began her career in an early stage of her life, particularly when she was a teenager. She started by moving to London to work as a presenter of the weekly music video countdown on JumpOff.TV. She was then selected to work for Sky on TRACE Sports and later, as a weekday DJ on Rinse FM.

In August 2014, Maya, 20 years old at this time, joined MTV as an anchor for ‘The Wrap Up’. Additionally, she hosted a travelogue titled ‘Copa90 ‘s Maya’s FIFA World Cup Cities’, dedicated to covering the 2014 FIFA World Cup in Brazil. Jama, likewise, co-presented a nine-part World Cup Taxi series for MTV dedicated to the event.

In September 2017 and February 2018, she appeared as a guest panelist on ITV’s ‘Loose Women’. In November 2017, she became the youngest person ever to co-host the annual MOBO Awards on Channel 5 along with fellow presenter Marvin Humes. Maya has also worked directly with The BRITS, hosting their Pre-BRITS Party in 2017 and anchoring a Facebook stream live from the Red Carpet.

Jama and Andrew Flintoff,  Ryan Hand, Radzi Chinyanganya, and  Frankie Bridge co-presented the Saturday night game program ‘Cannonball’ on ITV in 2017. In spring 2018, she joined BBC Radio 1, and was saddled with the responsibility of presenting Radio 1’s ‘Greatest Hits’ on Saturdays while also co-presenting on Fridays with Chris Stark and Scott Mills.

She hosted her first-ever television show on MTV’s ‘True Love or True Lies’, and ‘The Circle’ on channel 4 . She went on to co-anchor ‘Stand Up to Cancer’ with long-standers Adam Hills and Alan Carr, and in October 2018, she became the team captain on ITV2 rap show ‘Don’t Hate the Playaz’ hosted by Jordan Stephens. Since then, she has appeared on a number of shows including ‘The Big Fat Quiz of the Year’ and ‘A League of Their Own Road Trip’.

Maya presented her BBC Radio 1 program on Fridays and Saturdays 10:00 am–1:00 pm GMT, which of late brought her to our screens with her maiden appearance on ‘The Jonathan Ross Show’, alongside British comedian Jack Whitehall and punk legend Iggy Pop. She has also dabbled in comedic and acting roles.

Her presenting life aside, Maya has focused on a couple of other profitable ventures which have greatly contributed to her wealth and celebrity status. In summer 2018, she launched her own clothing line with fashion brand Pretty Little Thing, and launched another collection in February 2019. She has gone on to become an ambassador for several brands, including lingerie brand Freya for which she hosted their podcast, ‘When Life Gives You Melons’. Maya is also an ambassador for Adidas, featuring in the European JD Sports Christmas campaign. Furthermore, she is an ambassador for the Australian hair care company Aussie Hair. She was also seen in a Spring/Summer campaign and global GAP campaign for Kurt Geiger in 2019.

In 2018, she became an ambassador for Savera UK, an organization that operates across the UK to provide services to people from black ethnic minority communities whose lives are at risk of domestic abuse. When she donated blood for an NHS campaign in 2019, it was discovered that she had the rare and in-demand ‘Ro’ blood subtype.

In May 2020, it was confirmed by the BBC that Jama had left Radio 1 after spending two years at her position as the presenter. In early June 2020, she began co-presenting ‘Peter Crouch: Save Our Summer’, a Saturday evening BBC One TV program.

On 14 January 2021, the BBC published that Jama would take over from Stacey Dooley as the new anchor of ‘Glow Up: Britain’s Next Make-Up Star’. She replaced former presenter Dooley who had presented the first two series of the show.

In November 2019, Maya was awarded the People’s Choice Award for being the best-dressed star. After that, she opened and hosted the EE BAFTA red carpet in 2020 wearing a 5G powered AR dress.

She has been a television and radio presenter as well as an actress and model for the last decade of her life, and her profession has helped her make a respected name in the United Kingdom and across the world.

Between 2015 and 2019, the celebrity television and radio presenter was in a relationship with British rap sensation Stormzy. Their break-up inspired his 2019 single “Lessons”.

In September 2018, the television presenter was accused of colorism following the discovery of an offensive tweet she made in 2012 tweet mocking ‘dark skinned’ women. Jama subsequently issued an apology for the tweet, citing that she was 17 and “an ignorant, stupid child” when she made the social media post in 2012.

Jama currently lives in West London. She is a devoted football fan and supports both West Ham United and Bristol Rovers.

For Jama, her career life has been quite adventurous and memorable. She started pursuing her career since she was a teenager, and has now gone on to work as a presenter, model, and actress who also own a business on the side. She initially worked for JumpOff.TV in London, Rinse FM as a weekday DJ, and Sky on TRACE Sports. She has worked for the likes of MTV and BBC as a presenter and has hosted the MOBO Awards as well. She has also worked with the BRITS, and also hosted the 2020 EE BAFTA red carpet.

In addition to launching her own clothing collections and MIJ face masks line, Jama has served as a brand ambassador for Aussie Hair, Savera UK, Adidas, and Freya. She has modeled for several top brands as well, including the likes of Adidas, Kurt Geiger, Maybelline, and Gap. She made her acting debut in 2020 with a role in the Netflix comedy film ‘The Duchess’, and has also bagged several roles in films since then.

In December 2020, Maya Jama confirmed that two years earlier, she had become a millionaire at the age of 24, thanks to her radio and television presenting roles, and film debut,  as well as a fashion line and range of clothing collections, skincare masks, and ambassadorship and modeling gigs for brands like Adidas, Kurt Geiger, Gap, and Maybelline. At the age of 27, Maya Jama has accumulated a robust net worth of $2 million.