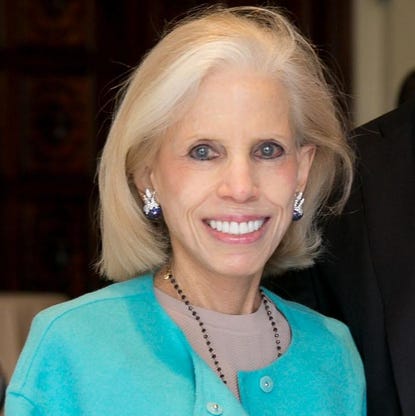 Margaretta Taylor is an American businesswoman and billionaire heiress who is best recognized for being a descendant of the reputed newspaper publisher James Cox. The most recent reports have revealed that her net worth stands at several billions of dollars. She specifically made her money from engaging in various businesses and by making various notable investments, although her primary source of fortune is her position as a member of the filthy-wealthy Cox family who found their wealth in the newspaper and media business. Here are the details you may be asking in regard to Margaretta Taylor’s biography, education, spouse, children, and success story in addition to several other useful information we have compiled in this in-depth article.

She was born Margaretta Johnson in the United States in the year 1942. She is the granddaughter of James M. Cox and the daughter of Anne Cox Chambers.

Margaretta was raised by her parents within the United States where she also completed all of her education. She was born into a wealthy and prestigious family, so we know that her childhood and upbringing was surely an enjoyable one for her where she didn’t have to want anything because her parents were able to afford everything she needed for her growth and survival. She has a brother named James, and a sister named Katharine.

Ms. Margaretta Taylor is best-known for being a successful billionaire businesswoman and heir. The bulk of her wealth has come from the media giant Cox Enterprises which was founded by her grandfather Mr. James M. Cox.

In 2015, Margaretta’s mother, Anne Cox Chambers, equally split her 49 percent share in Cox Enterprises between her three children, including Margaretta, and her siblings Katharine Rayner and James Cox Chambers. Margaretta’s son, Alexander Taylor, has been the chief executive officer of the Cox Establishment since January 2018.

Cox Enterprises’ headquarters is in Sandy Springs, Georgia. Through Cox Automotive, the international operations of the company span across Latin America, Asia, Australia, and Europe. The company is currently headed by Alexander C. Taylor as its chief executive officer. Alexander is a fourth-generation Cox family member. He is the son of Margaretta Taylor and a great-grandson of company founder James M. Cox. James C. Kennedy, a grandson of James M. Cox, as well as other members of the renowned Cox family are also members of the company’s board of directors.

On March 2, 2020, Cox Enterprises finalized the sale of Cox Media Group’s Ohio newspapers back to the company, and Cox First Media was subsequently formed. This move was orchestrated to ensure that the publications would continue to serve as daily newspapers for the southwest Ohio region.

The company, Cox Enterprises, was founded in Dayton, Ohio, in the United States by Mr. James M. Cox, who bought the Dayton Daily News in 1898. Mr. Cox became a member of the Ohio State’s delegation to the US House of Representatives and then the state’s Governor. In 1920, he was the Democratic Party candidate for the seat of the President of the United States in the 1920 presidential election, running fruitlessly on a ticket that had Franklin D. Roosevelt as a candidate for the seat of vice president.

Margaretta Taylor’s net worth is approximately $6 billion according to the most recent estimate. Born in 1942, the 79-year-old American billionaire heiress who is best known for being the granddaughter of James M. Cox and a daughter of Anne Cox Chambers received an equal share of 49 percent of her mother’s share in Cox Enterprises in 2015, which made her an instant multibillionaire.

She enjoys her mother’s share of Cox Enterprises equally alongside her two siblings James and Katharine. The company, Cox Enterprises Inc., is a privately held establishment that owns Cox Communications, AutoTrader.com, Valpak, Kelley Blue Book, and Manheim Auctions, as well as newspapers, television stations, and radio stations. The company is listed as one of the biggest and most successful privately held business ventures in the United States of America. Last year, they posted a revenue of $30 billion and claimed to have erected offices and locations in many countries across the world in addition to their over 60,000 employees.