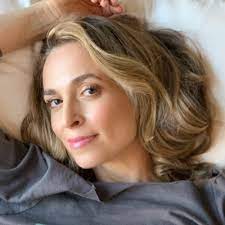 Jedediah Bila is a phenomenal woman. She is an American Author, radio presenter, and TV host. We have documented on this page a lot of interesting facts about the American author including Jedediah Bila Bio, her age, Career, Books, Marriage to Jeremy Scher, Net Worth and many other useful information. This article also covers various aspects of the TV Host’s life and many other details you will love to know about Jedediah Bila.

Jedediah Bila (A. Jedediah Louisa Bila) was born on the 29th of January 1979 in Brooklyn, New York City. She is a columnist, author, and television host. She is popularly known during her time on The View, as a co-host, and as an anchor on Fox and Friends weekend edition. As a columnist, she has written columns for various websites including Townhall, The daily Caller, FoxNews.com, Human Events and Verily.

Jedediah Bila graduated from Wagner College in 2000 with a Bachelor of Arts degree in Spanish. She has a Masters of Arts degree in Spanish literature, obtained from Columbia University. She began teaching in New York in 2005. As a teacher, she taught Spanish, creative writing and m improvisation to middle school, college and high school students. She served as a student advisor, teacher  and academic dean at Birch Wathen Lenox School preparatory school.

Jedediah Bila started out as a school teacher after she graduated from Columbus University where she obtained her Master’s degree in Spanish literature. In 2009 she moved from the education line to politics when she reviewed Mark Levin’s book on her blog, titled Liberty and Tyranny: A Conservative Manifesto on her blog. Mark Levin, on air, later read the review. This prompted Sean Hannity of Fox News to invite her on his TV show.

Two years later in 2011, Jedediah Bila appeared as a guest on Red Eye and Hannity, and soon expanded her commentator role to other networks including MSNBC and CNBC.  She later joined the Fox News team in 2013. AThe following year, she began appearing as a panelist and also as a co-host on various programs including The five, outnumbered, and others.

In August 2016, Jedediah Bila announced she was departing from Fox News so as to join ABC’s The View permanently as a co-host during it’s 20th season. Bila, while on the show, worked as a conservative voice to contrast the liberal co-host. She departed the show,  The View in September 2017. She however returned as a guest on October 17, 2018.

In 2017, Jedediah Bila hosted Abby Tells All, a Lifetime special. Occasionally, she appears on The Five, The Greg Gutfeld Show, and appears on different Sirius XM shows. Two years later in 2019, she became a permanent co-host of Fox and Friends Weekend.

As an author, her first book was published in 2011. The book was titled m Outnumbered: Chronicles of a Manhattan Conservative. Jedediah Bila’s book is an autobiographical recounting of her own experiences as a conservative living and teaching in Manhattan, New York City, during the 2008 presidential election. She published her school book #DONOTDISTURB: How I Ghosted My Cell Phone to Take Back My Life in 2018.

After being engaged for about eight months, Jedediah Bila got married to her sweetheart, Jeremy Scher, in 2018. Jeremy Scher is a graduate of Rice University. Be is a corporate strategist.

Jedediah Bila has cleared the air on whether she’s a Democrat or a Republican by saying that she is none. She says she is a registered Independent, and that she has a “strong libertarian streak.”

Jedediah Bila married Jeremy Scher in early 2018. Together they have a child, a boy, who the couple welcomed in November 2019.

Her estimated net worth currently stands at $2,000,000 (Two Million US Dollars).

How Medicare Advantage Plans Work And Its Pitfalls
Next Article