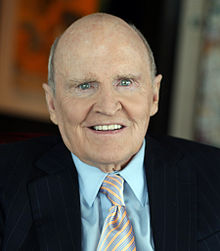 Jack Welch was an American business executive and former chemical engineer. He was one of the world’s most notable and honored CEOs, primarily known for being the CEO and Chairman of General Electric from 1981 to 2001. Under his leadership, the value of the company rose 4000%, thanks to his unmatched management practices collectively regarded as “The Welch Way”. At the time of his death in March 2020, Jack Welch net worth was $750 million.

Jack Welch was born John Francis Welch Jr. on 19 November 1935 in Peabody, Massachusetts, United States. He was born to a Boston & Maine Railroad Conductor named John Francis Welch Sr., and his wife, Grace Andrews. His maternal and paternal grandparents were Irish. Throughout his early life in high school and middle school, Welch worked in the summers as a newspaper delivery boy, shoe salesman, golf caddie, and drill press operator.

Welch participated in football, baseball, and captained the hockey team while he attended Salem High School. In his senior year, he was accepted to study chemical engineering at the University of Massachusetts Amherst. He worked in chemical engineering at PPG and Sunoco Industries during his college summers. In his sophomore year, he joined the Phi Sigma Kappa fraternity as a member. In 1957 he graduated from college with a Bachelor’s degree in chemical engineering, turned down offers from many companies in order to enroll in graduate school at University of Illinois at Urbana-Champaign.

In 1960, Jack Welch graduated from the University of Illinois, with a masters degree and a PhD in chemical engineering.

After graduating from the University of Illinois in 1960, Jack Welch joined a company called General Electric in
Pittsfield, Massachusetts, where he worked as a junior chemical engineer for a salary of $10,500 (around $90,000 in 2020 dollars). A year later he planned to leave his job as a junior engineer because unhappy with the raise he was offered, and was dissatisfied with the bureaucracy he discovered at the company. An executive at the company named Reuben Gutoff persuaded him to remain and promised he’d help him create the small-company atmosphere he desired.

In 1963, an explosion at the facility which was under his watch blew off the roof of the factory, and he was almost sacked for that episode. After eight years working with the company, Welch became the vice president and head of General Electric’s plastics division.

In 1981, he became the company’s youngest chairman and Chief Executive Officer (CEO), succeeding Reginald H. Jones. By 1982, he had disbanded much of the management assembled by Jones with aggressive consolidation and simplification. One of his main leadership directives was that the company, General Elastic, had to be top in the industries it participated in.

In 1980, the year before he became CEO, General Electric recorded revenues of approximately $26.8 billion and in 2000, a year before he left the company, they were nearly $130 billion.

By 1999 Fortune Magazine named Jack Welch “Manager of the Century”. Embedding employee development and succession planning is necessary since the departures of management may have significant consequences on any organization. This decision will have utmost effects on future activities. Welch was passionate in making people General Electric’s core competency. Prior to his retirement, there was a publicized and lengthy succession planning saga among Jeff Immelt, Robert Nardelli, and James McNerney, with Jeff Immelt eventually selected to replace Welch as CEO and chairman. Welch’s “walk-away” package from the General Electric company was not assessed at the time of his retirement, however, GMI Ratings estimates its worth at around $420 million.

Following his retirement from General Electric, Jack Welch became an adviser t Clayton, Dubilier & Rice private equity firm, as well as to Barry Diller the chief executive of IAC. In addition to his advisory and consulting roles, Welch was active on the public speaking circuit. He co-wrote a known column for BusinessWeek with his lovely wife, Suzy, for 4 years until November 2009. The New York Times syndicated the column.

On January 25, 2006, Jack Welch gave his name to the College of Business of Sacred Heart University which was “John F. Welch College of Business” until it began bearing the name the “Jack Welch College of Business” in 2016. Since September 2006, he taught a class at the MIT Sloan School of Management to a selected group of 30 MBA students with a displayed career interest in leadership. In December 2016, he joined a business forum put together by then president-elect
Donald Trump to avail policy and strategic advice on economic issues.

In 2009, Jack Welch established the Jack Welch Management Institute (JWMI). It is a program at Chancellor University which provided online executive Master of Business Administration. In 2011, his institute was acquired by Strayer University.

Jack Welch had four children with Carolyn his first wife. They divorced in 1987 after being married for 28 years. He married former mergers-and-acquisitions lawyer Jane Beasley in April 1989, and divorced her in 2003. Beasley was able to leave the marriage with about $180 million. He got married for the third time to Suzy Wetlaufer who co-authored his 2005 book Winning.

The fortunes of successful millionaire Jack Welch was hard-earned indeed. Joining General Electric at the age of 24, he worked his way up through the various departments of the company and found himself in the position of the company’s Chief Executive Officer (CEO)  at the age of 45. In his 21-year-long tenure as CEO, he transformed General Electric into one of the world’s most admired and successful companies.

After consistently collecting tens of millions in stock bonuses and salary for more than four decades, Welch was heavily appreciated  upon his retirement. His retirement package which included pension benefits, was said to be worth $417 million. In today’s rates his package was worth around $600 million before taxes.

After retiring he wrote several best-selling  business books. He pocketed $7 million advance for his popular book “Straight From the Gut”.