Herbert Chambers is a billionaire businessman from Massachusetts, United States. Most times simply referred to as Herb Chambers, he is hailed as the man who single-handedly transformed an entire industry. Herbert, 80, is the owner and president of The Herb Chambers group of Companies, a conglomerate of 60 car dealerships in greater Boston, in Massachusetts. He is ranked on the 400 richest Americans list presented by Forbes magazine.

Herbert G. Chambers was born on November 24, 1941 in Dorchester, Massachusetts, United States. His father was a commercial artist and his mother, on the other hand, was a homemaker. He grew up in a two-family home that was owned by his maternal grandmother. When he was 13 years old, his mother started collecting $15 from him per week as rent fees and this was when he began to work at the neighborhood Stop & Shop supermarket. He did very well in his activities in the market, earning raises and promotions, but his schoolwork suffered greatly. At that time, he was a student of the English High School of Boston. He ended up dropping out of school in his senior year to focus on making money.

Herbert Chambers was out of school and searching for a purpose in life by 1959, so he ended up going to work as an aviation electrician for the United States Navy. After four years in service and attaining the rank of Petty Officer Second Class, he returned home to join his family and started working at a bar his mother owned. He worked there for two months before getting sacked by his mother due to misunderstandings.

He soon started working as a copy machine repairer in Cambridge, Massachusetts for a pay of $75 a week, plus commission earned on any service contracts he sold. By the time he was age 22, he had launched his own copier distribution business called A-Copy America in Hartford, Connecticut, with funds borrowed from his parents. The copier business was moving to a sales model from a leasing model due to the newest cheaper copier models from companies like Sharp, Minolta, and Canon, and Chambers also joined in selling copiers as well as copy supplies. His business soon became the biggest Minolta and Canon dealer in the world with more than 1,500 employees in 36 offices. In 1983, he sold the A-Copy company to Alco Standard Corporation for $80 million and spent the next two years working for the company still.

Herbert Chambers started his automobile business in 1985 after acquiring an Oldsmobile-Cadillac dealership in New London, Connecticut. His decision to start the car-dealing business was based on his poor buying experience at the automotive dealership. As he improved the operations of this dealership, he established the reputed Herb Chambers Companies. 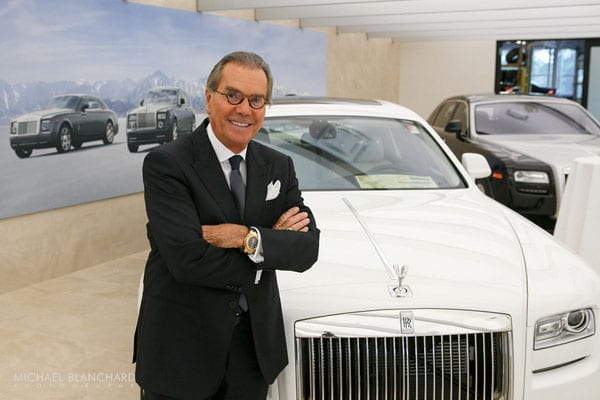 Mr. Herb Chambers is renowned as a successful American businessman who is the owner and president of The Herb Chambers group of Companies, a conglomerate of 60 car dealerships in Boston, Massachusetts. In May 2017, his exceptional contributions to the automotive industry earned him the New England Motor Press Association Executive of the Year Award. Forbes magazine ranks him among the 400 richest Americans. In May 2016, the University of New Haven awarded him an honorary doctorate in business administration.

The highly-respected businessman lives in Old Lyme, Connecticut. Each Monday morning, he commutes to Somerville, Massachusetts where his business is headquartered, by private helicopter. During the weekdays, he resides at the Boston Public Garden’s Four Seasons Hotel Residences. During his flying commute, Herb often stops at one of his car dealerships along the way for conferences. In addition to his Bell 429 GlobalRanger helicopter, he also owns a private airplane and a string of yachts that he purchased over the years.

In 2016, he helped to lead the move to bring back the mounted police unit of the Boston Police Department after budget cuts caused it to be disbanded in 2009. He was willing to contribute $100,000 from his personal money to the $1.5 million needed, with the remaining funds hopefully coming from city funding and corporate support.

As owner and president of The Herb Chambers Companies, Mr. Herbert Chambers’ net worth, over recent years, has experienced immense growth due to the success of his businesses. After working for the United States Navy and later getting fired by his mother, Chambers started his first business when he founded a copier distribution company with funds he had saved by working as a copy machine repairer earlier. He sold his copier distribution company for around $80 million and spent the proceeds in the acquisition of an automotive dealership which he eventually transformed to become The Herb Chambers Companies which is known world over as a conglomerate of 60 car dealerships based in Boston, in Massachusetts.

The 80-year-old billionaire is also an exotic car collector and has $1.4 billion to his name. He has owned cars like a Ferrari LaFerrari Coupe, a Mercedes-Benz SLR McLaren, a 1995 McLaren F1, and many others.