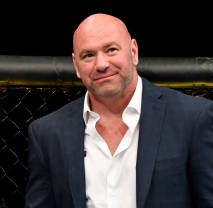 Dana White is an American businessman. He is a sports promoter the current President of the Ultimate Fighting Championship (UFC), the most popular mixed martial arts organization in the world. In 2016 when the UFC was sold to William Morris Endeavor (WME), Dana owned 9% of the company. Previously, he had sold the majority to billionaire casino magnates, the Fertitta brothers. Before taxes, Dana’s 9% cut from the sale of UFC was around $360 million, which can be said to have influenced Dana White net worth that is currently estimated at $500 million.

Dana Frederick White Jr. was born in Manchester, Connecticut, United States, on 28 July 1969. Him and his sister Kelly were born to June and Dana White, and were mostly raised by their mother and grandparents.

Dana spent his youth shuttling between Las Vegas and Maine. While growing up, he paid a lot of attention to sports, especially boxing. He is also a lifelong fan of the American baseball team the Boston Red Sox. He was a student of Hermon High School in Maine.

After graduating from Hermon High School in Maine, Dana White enrolled at the University of Massachusetts, but he did not finish. While he was there, he initiated a boxing program for “at-risk children” in the inner city. In order to make a living during this time, he became started to work as an aerobics instructor as well. Eventually, he moved to Las Vegas and, in 1992, founded Dana White Enterprises. During this time he began to manage fighters like Tito Ortiz and Chuck Lidell. He continued to expand his endeavors into other styles of fighting including “Muay Thai” and “Mixed Martial Arts”, styles that later came to define the Ultimate Fighting Championship.

Luckily for Dana, he had spent some time while growing with Lorenzo Fertitta, a former classmate at high school who had achieved fame as an executive at Station Casinos, a hotel and casino company. They reunited at a wedding somewhere in the 1990’s, bonding over the love they shared for boxing and planned that they hoped to work as a team in the future. It was while being in charge of fighters that he became embroiled in problems with the UFC. After looking into the finances of the parent company of the UFC, Semaphore Entertainment Group, Dana discovered that they were going broke. Upon learning this news, Dana approached his long time friend and former Classmate, Lorenzo Fertitta, about making an offer. Lorenzo realized how profitable it could be for them and he made a deal to acquire the UFC. Lorenzo also involved his brother Frank to come into the deal. In total, Lorenzo and Frank Fertitta brothers paid $2 million for an 81% ownership stake in UFC in 2001. They soon appointed their friend Dana as president.

In the years since acquiring the UFC, Dana and his team have transformed the organization, which was formerly seen as barbaric and illegal, into an international phenomenon. Even after the sale of the company in 2016, Dana has continued to serve as it’s president. Under his leadership, the popularity of the sport has been increased and it has become a multi-billion dollar business. In May 2017 the UFC announced that Dana would be the host of a show titled “Dana White’s Contender Series”. The show was exclusively available through UFC’s only licensed digital streaming service, UFC Fight Pass. It features up-and-coming fighters and provides them the opportunity to put their skills on display so that they may one day get through to the UFC.

On March 18 2019, Dana White signed a new seven-year deal with ESPN to remain the UFC president.

Dana White and wife Anne Stella have been married since 1996. The two met when they were both in eighth grade. They have three children together, and prefers to keep their family private.

In 2012, Dana White was diagnosed with Ménière’s disease, a neurological disorder which he claims was caused mostly by the fights he was a part of in his days as a youth.

His achievements speak volumes. He was named Nevada Sportsman of the Year in 2009. For nine straight years, he won Promoter of the Year at the Wrestling Observer Newsletter Awards. For eleven years from 2008-2019, the World MMA Awards named Dana White as the Leading Man of the Year, and in 2019 he received a Patriot Award from The Armed Forces Foundation.

Talking about Dana White net worth and salary, his fortune has come from his active involvement in sports, particularly as the president of the Ultimate Fighting Championship (UFC). In 2016 when the UFC sold to William Morris Endeavor (WME) for as much as $4 billion. Before taxes, Dana’s 9% cut from the sale of UFC was around $360 million. With Dana as president of the UFC, the organization has developed into a highly successful business, and even recorded a gross revenue of $600 million in 2015. There are various reports suggesting that the UFC president takes home a base salary of $20 million at the end of every year according to the newest deal he signed with ESPN in 2019. While we expect that he definitely should receive a pay worth millions, there are currently no official reports about what he takes home at the end of his everyday job at the office.

Dana White net worth is estimated at $500 million.