Home > Wealth > Who is Chuck Feeney? The Biography of the Secret Billionaire Whose Life Teaches Us Frugality

In this article, we will take a deep dive into the life of Chuck Feeney, American Billionaire, whose main goal today is to die broke.

Charles Francis Feeney, who is popularly known as Chuck Feeney is an Irish-American businessman and also a philanthropist. He was born on 23 April 1931. He is the founder of one of the biggest private foundations in the world, “The Atlantic Philanthropies.” “He also a co-founder of “Duty-Free Shoppers Group”, where he began making a great fortune.

Feeney is known for being frugal, and he prefers living in rented accommodation, eating in a less expensive restaurant, dressing simple, not owning a house or car, flying economy-class, and just living simply in general. At some point in his life, he secretly gave away his fortune for so many years, which later came to light only after his name was revealed in a business dispute in 1997. He has given away over $9 billion in the course of his life.

Feeney was born on 23 April 1931, to Irish-American parents, Madaline Feeney and Leo Feeney, in Elizabeth, New Jersey during the Great Depression. He has two sisters, Ariene Fitzpatrick and Ursula Healy. From traces, it shows that his ancestors come from County Fermanagh in Northern Ireland. Feeney attended and also graduated from Elizabeth’s St. Mary Assumption High School in 1949. He has always had a very wonderful charitable spirit and 2016, he donated $250,000 to his school, (and from their records, that has been the highest contribution from a single individual).

In the 1950s, during the Korean War, he served as a U.S. Air Force operator, and later started his career of selling duty-free liquor to US Naval personnel at Mediterranean ports.

Feeney married his first wife Danielle, who was French. He had five children with her, four beautiful daughters and a son, and their names are Juliette M. Feeney-Timsit, Caroleen A. Feeney, Diane V. Feeney, Leilie D. Feeney-Baily, and the boy named Patrick A. Feeney.

His frugality has no bounds and up to the age of 75 years, Feeney was still traveling in a coach and carried his reading materials in a plastic bag. He does not have lunch inexpensive luxury restaurants but in moderate restaurants, where he eats snacks like burgers. He was still leaving in a rented apartment in San Francisco, up till 2016, and he still had a capital of $2 million. 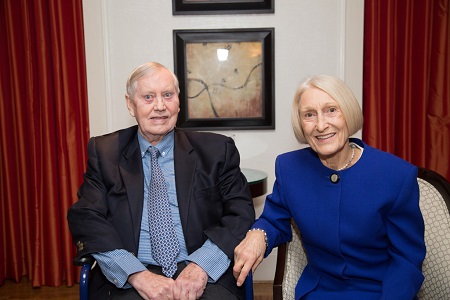 In the early 1950s, Feeney and his college classmate Robert Warren Miller adopted the concept of “duty-free shopping”, (which is a concept that has to do with giving huge-end concessions to travelers, free of import taxes). They kept expanding their businesses and went into selling tobacco and cars. By 7th November 1960, they founded the Duty-Free Shoppers Group(DFS Group). They started DFS Group in Hong Kong and later expanded to Europe and other continents. In the early 1960s, DFS’ first massive breakthrough came when it got the exclusive concession of duty-free sales in Hawaii, permitting it to sell its products to Japanese travelers.

In the mid-1990s, DFS was making profits of up to $300 million annually, which was shared among Feeney, Miller, and two other smaller associates.

In 1996, Feeney took a bold move alongside one of the partners and sold their shares in DFS to the French luxury conglomerate Louis Vuitton Moet Hennessy(LVMH).

Feeney founded the Atlantic Philanthropies in 1982 and by 1984, he secretly did a transfer of his whole 38.75% stake in DFS, which was worth about $500 million, to the foundation. He never allowed anyone to know that he was no longer the owner of the stakes in DFS Group.

And so through, Atlantic Philanthropies, he began giving out money in secret for many years and made it compulsory for the recipients not to expose the source of their donations.

From most Feeney’s philanthropic gestures, Cornell University, which is his Alma matter has benefited the most. They have received $1Bn both in direct donations and gifts from Feeney, including the $350 million donations which were used for the New York City Campus.

Feeney has also donated almost $1 billion to support education in Ireland, especially for third level institutions like the Dublin City University and the University of Limerick. Feeney has also given donations to Sinn Fein, which is a left-wing Irish nationalist party that is associated with IRA by history and has been a great help in the support of peace in Ireland.

Feeney had been a major supporter of the modernization of public-health structures in Vietnam.

In February 2011, Feeney became part of the signatory to ‘The Giving Pledge’, which was founded by Warren Buffett and Bill Gates. In Feeney’s letter to the founders of ‘The Giving Pledge’, he said: “I cannot think of a more personally rewarding and appropriate use of wealth than to give while one is living – to personally devote oneself to meaningful efforts to improve the human condition. More importantly, today’s needs are so great and varied that intelligent philanthropic support and positive interventions can have great value and impact today than if they are delayed when the needs are greater.”

Toward the end of 2016, Feeney gave away his last $7 million, to Cornell, which has benefited so much from his donations.

Yes, he is very much alive. Within the last few years, he has given over $2 billion of his fortune to Ireland making over $9 billion in donations throughout his lifetime. By the end of the year 2020, he will go officially broke and according to Christopher Oechsli, the CEO of Feeney’s Atlantic Philanthropies.

According to his CEO, Feeney’s lifestyle was inspired by his mother, who was an extraordinary woman, known for her charity and compassion that she clearly passed to her son.

Feeney has never cared about the trappings of wealth. Currently, his goal is to ensure that his last check bounce. After decades of traveling around the world and impacting thousands of lives, he now lives in San Francisco, in a small rented apartment with his wife Helga.

Fast Facts about Chuck Feeney Biography and Lessons from his life

On a general note, Feeney has transformed University education in many regions, helped bring peace to Northern Ireland, funded numerous human rights organizations, and just about many things to diverse countries. He is truly an Icon and his legacy of giving will live long after him.