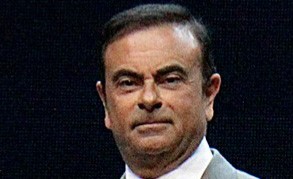 Carlos Ghosn is a French-Lebanese-Brazilian business executive who is probably best known for being the former chief executive officer and chairman of Japan-based auto company Nissan. He was also the Chairman and chief executive officer of Paris-based Renalt-Nissian Alliance, and oversaw the partnership which merged the two companies together through a cross-shareholding contract. He has been hailed as ‘a true leader’ due to his works and accomplishments with the firms he controlled during the peak of his career, earning millions in salary for his services, and amassing a massive fortune which placed him on the list of the richest Brazilian CEO’s.

Carlos was born on March 9, 1954 in Porto Velho, Brazil. He has a Lebanese father and French mother, and can speak at least four different languages. It was him who brought Nissan back from the edge of bankruptcy in the 1990s, by coordinating one of the most insistent downsizing campaigns of the decade, earning him the nicknames “Mr. Fix It” and “Le cost killer”. Thanks to the success he pulled off by positively turning things around at Nissan, Carlos attained celebrity status in the global business fronts and was named among the 50 most popular people in global business and politics in the year 2003.

After graduating from college, Carlos spent the next 18 years of his life working at tire manufacturer Michelin. He played his part within the company intensively, and his workrate saw him rise to the position of plant manager. He was name chief executive officer of Michelin North America in 1990, and he oversaw and handled the restructuring of the company after it acquired the Uniroyal Goodrich Tire Company. He was applauded for in turning Michelin’s South American operations around, and in 1996 moved to Renault and was immediately installed as Executive Vice President. He oversaw the forming of the Nissan/Renault partnership in 1999.

Carlos Ghosn was arrested in Tokyo, Japan on November 19, 2018 on charges that included tax evasion, false accounting, and using the company’s money for personal expenses. It was reported that he misused company funds and failed to report $44 million worth of pay. He shocked the world in January 2020 when he planned an audacious escape from Japan where he was held to Lebanon. Carlos allegedly hid in an audio equipment box conveyed by a fake band comprised of ex-military officers. The box with Carlos inside was loaded onto a private jet and flown to Turkey. It was said that the plane got to Turkey, he boarded another plane and was whisked off to Lebanon.

Carlos Ghosn was nicknamed “Mr. Fix It” and “Le cost killer” for his achievements in the business industry. His contributions won him several awards during the most active years of his career, and even earned him a celebrity status as a world-famous businessman. Some of his many awards and honors include:

Carlos Ghosn was married to Rita Kordahi from 1984 to 2012. Their union produced four children including Anthony, Maya, Nadine and Caroline. He married Lebanese-American Carole Nahas in 2016.

At the peak of Carlos Ghosn’s career, his annual salary could reach up to $17 million. He technically collected three salaries, one from Mitsubishi, one from Nissan and another from Renault. For example, when he earned a total of $17 million in 2017, his pay was made up of $8.44 million from Renault, $2.02 million from Mitsubishi, and $6.53 from Nissan. At the time of this man’s arrest, he owned about $60 million worth of shares in Renault SA, Mitsubishi Motors Corp, and Nissan. He has also earned a minimum of $144 million in salary plus bonuses since 2010. Prior to 2010, Japanese companies weren’t required to report executive pay. It is likely that he earned millions of additional compensation that he wasn’t required to disclose before 2010. Had Carlos Ghosn not been arrested, additional compensation packages could have awarded him shares in Nissan worth at least $200.

Months after his arrest, investigations revealed that Carlos owns at least $25 million worth of possessions around the world, including mansions in Lebanon, France and Brazil. His apartment in Rio was bought for $6 million in 2011. He splashed $8.75 million for a mansion in Beirut in 2012, and then spent $6 million on furnishings and renovations. During his time as chief executive officer at Nissan, the company paid $9,000 every month for Carlos Ghosn to have an apartment in Amsterdam, Holland, and an additional $9,000 every month for his apartment in Tokyo. Nissan also owned Gulfstream G650 private jet worth $70 million which was used by Carlos on a regular basis.