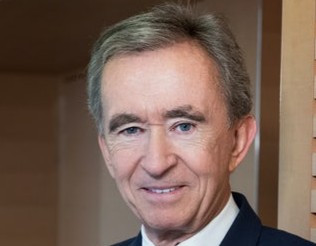 Bernard Arnault is a renowned French business tycoon and investor. At this time, he is the wealthiest man in France and one of the wealthiest in the world. Since 1989, he has been serving as the chief executive officer and chairman of LVMH (Moët Hennessy Louis Vuitton) Company where he is also the main shareholder. Born into a family of business-minded people, his father was a businessman who perhaps passed his business acumen down to Bernard who was blessed with a sharp business mindset from a young age. After completing high school, Ben enrolled at the Ecole for a degree in engineering, and once he has graduated, the young energetic man joined his father in his civil engineering and construction business as a qualified engineer, and worked efficiently towards the company’s growth and success. He convinced his father to switch the focus of their company to the flourishing real estate sector, and they achieved considerable success in that field. Bernard was able to realize some money from his business with his father, so he set out to grow himself and establish his name in any ways possible. He eventually started purchasing other companies he could afford, and became the owner of the Le Bon Marché department store and Christian Dior brand. When LVMH was established as a result of a combination between two companies, Ben Arnault invested millions of his money in the shares of the new business and became the LVMH Company’s first shareholder. Eventually he was voted to be chairman of the executive management board and he worked hard in this position, leading an extensive expansion plan and transformation of the company into becoming one of the biggest luxury groups in the world. As aforementioned, Ben is one of the world’s richest men. His multi-billion dollar net worth has come from his long reign as a leading businessman and chief executive officer of one of the most expensive and luxurious brands in the world. Here’s all that there is to know regarding Bernard Arnault’s biography and history, as well as his financial data and how he has acquired his enormous wealth.

Bernard Jean Étienne Arnault was born on 5 March 1949, in Roubaix, France. His father, Jean Leon Arnault was an engineer and manufacturer who owned the civil engineering company, Ferret-Savinel. For his education, a young Bernard attended Maxence Van Der Meersch High School in Roubaix. After completing his schooling he enrolled into the prestigious École Polytechnique, graduating in the year 1971 with a degree in engineering. 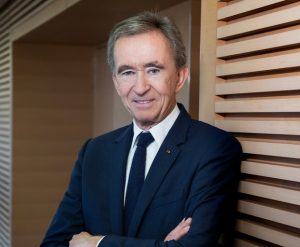 AS soon as he completed his tertiary education and bagged his engineering degree, Bernard joined his father’s construction company and helped turn the company’s focus from just construction works to the booming real estate business. Once he was selected to lead the company as president, Arnault set out on a mission to expand the company beyond anyone’s imagination. He started fulfilling his plans by acquire several companies, including the luxury goods company Financiere Agache. He also secured the acquisition of a diaper manufacturing company Peaudouce, as well as Boussac Saint-Frères, a textile company that was struggling after having suffered losses.

In 1987 he became the chief executive officer of LVMH, and two years later, he was named chairman of the company having bought LVMH’s majority shares. Today, Bernard Arnault has led the company to become known world-over as one of the top luxury groups worldwide, alongside two other companies Kering and Swiss Luxury giant Richemont. He has overseen the successful acquisition of major brands such as Les Echos, Loewe, Celine, Kenzo, Berluti, La Tribune, among others. He has also invested heavily in several other companies including notable names like Netflix, Boo.com, Zebank, Colony Capital, Princess Yachts, and Château d’Yquem.

Bernard has married twice in his lifetime. His first wife was Anne Dewavrin, whom he married in 1973 and divorced after seventeen years. Presently, he is married to Hélène Mercier. He has five children who he has also included in the LVMH Empire. Some of the children are Delphine Arnault, Frederic Arnault, Antoine Arnault, and Frederic Arnault.

Bernard Arnault net worth as of today is expected to be around $133 billion. He is one of the three richest men in the world, and the richest person in the whole of France. His financial status lists him among other wealthy persons such as Jeff Bezos and Mark Zuckerberg. He started gradually just like many other entrepreneurs, and was able to make his wealth through shares and profits realized from the LVMH company. It is widespread information that the company of which he is chairman and chief executive officer makes billions in revenue from selling luxury goods. When stock surge, he could make up to billions in just about 72 hours. Some of the most notable brands under the LVMH umbrella are Moet & Chandon, Louis Vitton, Christian Dior, and Tiffany & Co. Other products under LVMH include Rimowa luxury suitcases, TAG Heuer watches, and Dom Perignon champagne.

Arnault is a major shareholder in the LVMH company and his wealth might shoot up in the next few years if stock rises in his favor. Business asides, he is an art collector and has a wonderful collection consisting of works by Yves Klein, Picasso, Henry Moore, Andy Warhol, and several others.