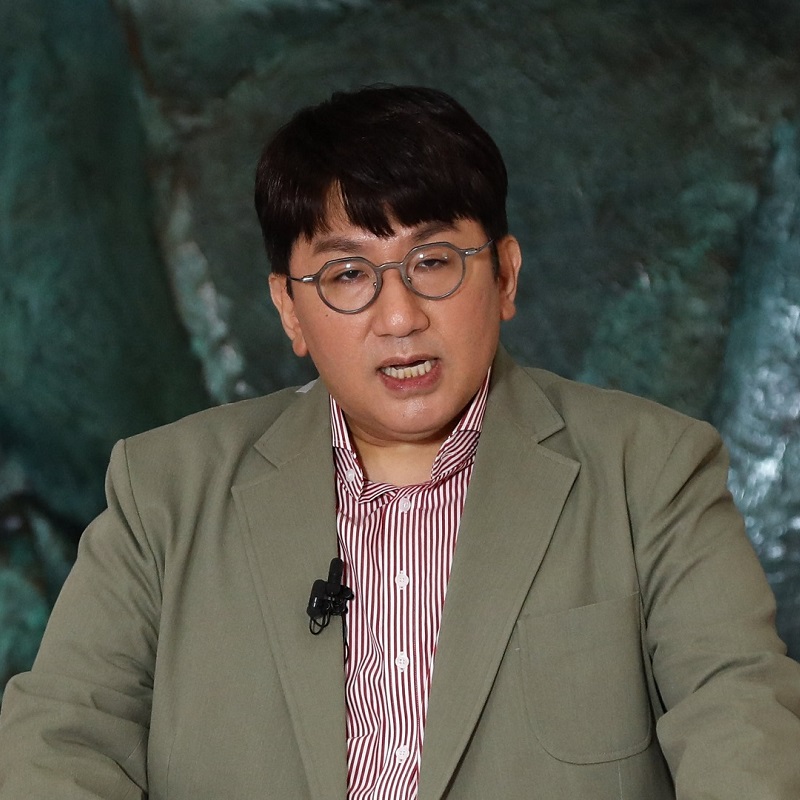 Bang Si-hyuk is the founder and chief executive officer of Big Hit Entertainment.  He is a South Korean record executive, composer, producer, and lyricist. He is also a songwriter in his own right, and his career started at Seoul National University where he started writing songs. After meeting Park Jin-young, the two men became a duo of hitmakers. In 1997, Park established JYP Entertainment and Bang joined him as a producer and songwriter, working on hits including singer Baek Ji-young’s ‘My Ear’s Candy’ and ‘Like Being Hit by A Bullet’,  singer Rain’s ‘Bad Boy’, as well as boy band g.o.d.’s ‘Sky Blue Balloon’, and more.

Bang was born in South Korea on August 9 1972. His passion for music started early, as he was brought up in a musical home. However, he was discouraged by his parents from pursuing a career in music.

For his education, he went to Kyunggi High School and later attended Seoul National University from where he graduated with his bachelor’s degree.

Bang Si-hyuk debuted as a composer during his time in college. He met Park Jin-young in the 1990s, and the pair partnered together as a songwriting duo. When Park established his company JYP Entertainment, Bang came on as a composer, arranger and producer. One of their early successes was the group g.o.d. They were largely responsible for producing g.o.d’s debut album “Chapter 1”, with Park serving as the primary songwriter and producer while Bang arranged the music and instrumentation. Besides g.o.d, whose success earned Park and Bang a reputation as the most revered hitmakers in South Korea, Bang has produced or composed for many others in the industry including veterans Park Ji-yoon and Im Chang-jung, and singer-actor Rain, R&B singer Baek Ji-young, and groups Teen Pop, 2AM, and Wonder Girls.

In 2005, Bang bade farewell to JYP Entertainment and established his own company, Big Hit Entertainment, where he dedicated more of his time to writing, composing and producing for Big Hit artists. He co-wrote six songs on BTS’ 2016 album, Wings, which recorded a massive success. The success of the Wings project garnered Bang recognition and several awards that year, including Songwriter Award at the Melon Music Awards and Best Producer Award at the Mnet Asian Music Awards. In June 2018, he was named by Variety as one of its International Music Leaders due to the achievements of BTS’ achievements.

On July 1, following an organizational restructuring, it was announced that Bang was stepping down from his position as the chief executive officer of Hybe Corporation to return his focus to music production. He was replaced by Park Ji-won, however, he retained his position as Board of Directors chairman. Bang has had the opportunity of working with some of the finest names in the entertainment industry of South Korea. He has won numerous industry honors for his works as a songwriter, producer, and innovator, including multiple Mnet Asian Music and Melon Music Awards. Bang has also won producer awards at the Genie Music Awards, Seoul Music Awards, Golden Disc Awards, and Gaon Chart Music Awards. Additionally, he has made it to countless lists and magazines like Forbes, Vogue, Variety, etc.

Former Hybe Corporation’s chief executive officer, Bang Si-hyuk has never been reported of being married. He also has no children as far as the media is aware of. He is reportedly single and appears to be concentrating on his career and other professional things.

In April 2019, Bloomberg estimated Bang Si-hyuk’s net worth to be about $770 million. The BigHit IPO submitted in October 2020 was the largest seen in the whole of South Korea in three years and it skyrocketed Bang’s wealth to a whopping $2.8 billion, making him the only billionaire in the entertainment industry of the country and the sixth-richest person there as well. The success of the IPO, combined with the commercial success of the band BTS that year, enabled Bang to step into diversification with applications like Weverse, and potentially profitable acquisitions of companies like Pledis Entertainment, Source Music, and several others, and this feat landed him on Variety’s 2020 edition of its yearly index of the 500 most influential/successful business leaders in the global media industry. In June 2021, Forbes Asia published its Korea 50 Richest People list, and Bang, one of the only two newcomers to the ranking, was listed as the 16th wealthiest richest person in South Korea. His net worth, as of this writing, is slightly over $3 billion, and as evidenced by all of his accomplishments and performances, Bang has made his wealth from Korea’s fast-rising entertainment industry. He has produced albums by such groups as GFriend, 2AM, Teen Top, and global phenomenon BTS.