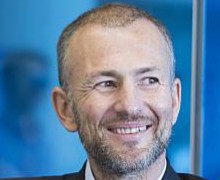 Andrey Melnichenko is a Russian businessman and philanthropist who is considered one of the most popular self-made business tycoons of the country. In 2017, he was ranked 9th as the richest businessman in Russia. He was also ranked 89th in the World’s billionaires list of 2017 by Forbes. He has painstakingly worked his way to the peak with his skill sets and acute sense of business. Andrey started off initially in the banking and finance sector, and later progressed to setting up several industries. He started by establishing the Siberian Coal Energy Company (SUEK) and then went ahead to acquire a stake in EuroChem, the popular mineral and chemical Company. He also initiated the energy generator, Siberian Generating Company. Currently, this industrialist holds about 92.2% of the shares in SGK and SUEK each, and about 90% of the company shares in EuroChem. He currently serves as Chairman of the Strategy Committee at all the three- EuroChem Groups SGK, AG, and SUEK Group. Andrey Melnichenko net worth is estimated to be more than $15 billion, establishing him as the 9th richest man in his country Russia. Asides business, he is famed as one of the leading philanthropists and main social investors in Russia. It is reported that he has invested over $16 billion in Russia’s industrial sector and economy till date.

Andrey Melnichenko was born in Gomel, Belarus on March 8, 1972. Born as a Belorussian, he relocated to Russia when he was still young. He attended the Boarding School of the Specialized Education and Research Centre for his early education from. The centre prepares students to gain admission at the leading universities in Russia. He later enrolled at Moscow State University’s School of Physics but eventually transferred to Plekhanov Russian University of Economics, where he graduated from with a bachelor’s degree in Arts with a major in Finance Credit in 1997.

Melnichenko started his career as soon as he earned his bachelor’s degree. He started working in currency exchange managing a number of booths in Moscow. He soon progressed to banking and finance, and performed greatly in this sector. In 1993, he co-founded MDM Bank and occupied the position of Chairman of the Management Board for four years. In 1997, he bought the share of his partners, and became the only shareholder of the establishment. By 2003, MDM Bank had become a leading private sector bank in Russia. He chaired the Bank’s board of directors from 2001 to 2005. He expanded the company’s horizons further, and co-founded the MDM Group in the year2001. The new group comprised industrial assets which later made up the mineral and chemical Company EuroChem and Siberian Coal Energy Company (SUEK). He served as President of the MDM Group for from 2001 to 2004.

Apart from coal and mineral, Andrey was among the founders of the TMK Pipe and Metallurgic Company. Within a short period of time, it became the largest maker and exporter of steel pipes in Russia. Later in 2004, he sold his share of the company in the London Stock Exchange.

Between 2004 and 2007, he sold out all of his personal shares of the MDM Bank to his closed friend and partner Sergei Popov. Though his move was criticized in the first instance, it was eventually revealed that his plan was to focus his energy on the advancement of his industrial and energy assets— the Siberian Generating Company (SGC), the fertilizer company EuroChem, and the coal producer SUEK. He created the SGK in 2011. Two years later, he purchased all the shares held by his former partners to become the main shareholder of SGK and SUEK. From March 2004 to April 2015, he headed the OJSC SUEK Board of Directors.

His business ventures aside, he serves as Chairman of the Mining Commission, and has been a board member of various organizations in Russia.

Due to his good deeds and philanthropic works, Andrey Melnichenko was honored by the President of Russia in 2016. He is renowned for his contributions to various charity causes, and remains one of the most decorated persons in Russia to this day.

The business tycoon married former model and singer Aleksandra Melnichenko in 2005. He has a huge passion for culture and arts, and has an impressive collection of paintings that adorn his expensive home and cars. Some of the pieces of rich art in his collection include works by world famous artists.

Andrey, a Russian industrialist and philanthropist, is considered one of the wealthiest men in the world. He has business interests in many fields, especially minerals and fertilizers. He is the main beneficiary of the EuroChem Group AG and SUEK JSC.

A self made billionaire, Andrey Melnichenko net worth is $15 billion. He has been in the spotlight for many years running due to his luxurious lifestyle and expensive properties. He owns two yachts that have been designed by Philippe Starck. He owns several expensive cars and a Boeing 737 BBJ. Andrey’s mansion, Villa Altair, in Antibes served as his wedding venue. He also owns an estate in Ascot, Berkshire in the UK.