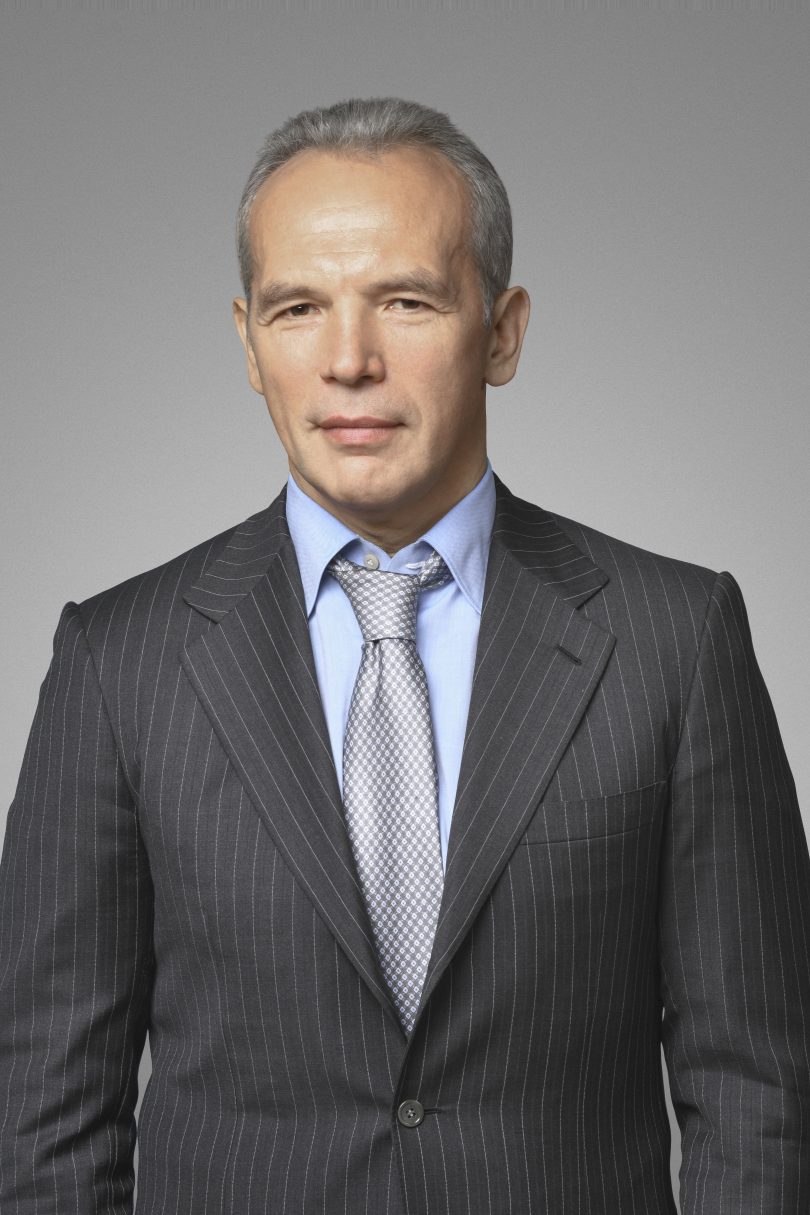 Alexander Skorobogatko is considered by many to be a self-made business man who started his career from the scratch. Hailing from Donetsk Oblast, he gradually worked his way from a blue-collar family into the upper echelons of the world’s super-rich, through fierce determination, partnership, and education. He teamed up with a fellow sport enthusiast, entrepreneur, and business partner Alexander Ponomarenko to create a massive enterprise of businesses across Russia and beyond. Over the years, Skorobogatko established a trust to prevent a conflict-of-interest between his public life as a civil servant and his business interests.

He routinely attributes his tremendous success to a stable and supportive home life, provided by his parents. His father stressed the importance of hard work and patience. He ascribes his tremendous success to his ability to overcome his fears and what he perceived to be his limitations. By focusing on goals, education, and strategically managing his life, he became a monumental success. Initially, his focus was on sports, where he enlisted in the army and athletic company of Donetsk-based unit. After being discharged, he put his sporting pursuits behind him and focused on education, business, and politics. Acutely determined, and adeptly capable of managing large-scale projects, he quickly put his talents to good use. Early on in his business career, he teamed up with another physical education student with a flair for business, Alexander Ponomarenko.

The entrepreneurial duo began a cosmetics manufacturing enterprise. The two later diversified into other industries including road haulage, construction materials, banking and finance, logistics, seaports, and real estate. Their belief in the future of Russia as a growing economy with endless opportunities spurred them to greater heights. Ultimately, Alexander Skorobogatko was appointed as a member of the Board of Directors of the Sheremetyevo International airport – a top 100 airport in the world. Hard work, education, partnership, and good fortune paved the way for Alexander Skorobogatko to become a hugely successful Russian businessman with diverse asset holdings, connections, and experience.

Alexander Skorobogatko was born on 15 September 1967 in Donetsk Oblast, Ukraine, USSR. This son of blue-collar parents, a coal miner father and a hard-working sales clerk mother, he was instilled with a sense of purpose, hard work, and determination to succeed. When questioned about his entrepreneurial flair and business savvy, he attributed that to his father. His father’s advice vis-à-vis ‘persistence and dogged determination’, remained with him throughout his life. At the age of just 12 years old, he took to competitive martial arts, by the time he enrolled for his military service, he was in peak physical form, with a mindset ready to take on the world.

He was always driven to succeed, and began his first business at just 20 years old. He attended the Slavyansk State Pedagogical Institute, and earned a degree in physical education in 1994. Two years later, in 1996, he completed his Master’s Degree in Finance, and was awarded by Plekhanov Russian Academy. Throughout his formative years, he believed in the future of Russia, and the opportunities that lay ahead. He was particularly excited about the opening of the Russian economy, and the opportunities in respect of the legalization of private entrepreneurship.

Along with Alexander Ponomarenko, he believed that Russia deserved modern businesses that appreciate their clientele, with value-added propositions in place. One business after another was created, lessons learned, and profits generated. From a Crimea-based perfume manufacturing company to working as a sales agent at Kerch Company, Skorobogatko pushed hard for success in everything that he did. Naturally, as his experience built up, so too did his capital resources, ultimately positioning him and his business partner for the meteoric rise to Russia’s business elite class.

Alexander Skorobogatko’s career began at a tender young age and flourished over the years. During his early years, he focused on his physical prowess and conditioning, becoming a talented martial artist, with the disciplines of judo and sambo. After he completed his time in the army, at the Donetsk-based athletic company unit, he focused his efforts on education and entrepreneurship. He earned a degree in physical education from Slavyansk State Pedagogical University, and soon teamed up with fellow PE student and entrepreneurial wunderkind, Alexander Ponomarenko. Together, they would go on to achieve great things for themselves, and Russia. Success was a byproduct of their determination and business savvy.

Their first adventures together started with cosmetic products and fragrances, followed by construction materials in Crimea. After that, they began a trucking and haulage company, while Skorobogatko worked at the Kerch Company as a sales agent. But it wasn’t until 1991 that the pair moved to Moscow, Russia. Alexander immersed himself in banking enterprise, and the two of them purchased a share in a private bank named Yalosbank in 1993. That venture failed, but they were undeterred in their pursuits. Next, they bought into Russian General Bank (RGB) in 1996. The bank became a top 100 credit institution in Russia, reaching 62nd place by 1999. The rapid growth and transformation of the Russian economy was a harbinger of good fortune for the pair, and they continue to plough ahead undeterred.

By 2000, the RGB was rebranded and turned into a full-service bank with branches across major cities in Russia. They then began diversifying into credit organisations, consolidating into Investsberbank. The bank’s balance sheet ostensibly hit 24.8 billion rubles within 6 years, before it was sold to the Hungarian OTP Bank Group. The deal was valued at $470 million. Next up, the partners diversified into Novorossiysk Commercial Sea Port. Skorobogatko was listed as a member of the Board of Directors in 2001. The Board strategically implemented aggressive growth policies, developing cargo peers, tank firms, and new terminals. These were designed to increase NCSP capacity from a level of 63 million tons in 2002 to 82 million tons in 2010. After successfully completing an IPO on the LSE in 2007, the company was valued at $5 billion, equivalent to the port of Shanghai.

Owing to his tremendous success as a strategic manager, with an ability to solve complicated problems, Skorobogatko put his business acumen to the side and embarked upon a career in politics. To avoid conflicts of interest, he placed his business interests in a trust, acting for the benefit of Skorobogatko and Ponomarenko families’. His sense of civic duty and community responsibility ultimately led him to a successful political career. In 2002 he became a Senator of the Kaliningrad Region, overseeing industrial development affairs. Also in 2002, he ran for a seat in the State Duma of the Russian Federation, with the Liberal Democratic Party of Russia. In 2007, Skorobogatko joined United Russia, enjoying re-election multiple times to the State Duma, where he served on the State Duma Committee for Civil, Criminal, Arbitration and Procedural Law. In 2016, he left the State Duma and went back into private business.

Alexander Skorobogatko has been awarded multiple times throughout his illustrious career as a businessman, academic, and philanthropist. In 2003, while serving as Senator of the Kaliningrad Region, he was awarded a diploma for his contribution to the Russian State building, and for developing a Parliamentary system in Russia, courtesy of the Council of Federation. In 2004, Patriarch Alexy of Moscow bestowed upon in the order of St Sergius of Radonezh 3rd class for his philanthropic activity. In 2011, the President of the Russian Federation signed an Order of Friendship for Skorobogatko for his work in the State Duma.

Naturally, his education is high on his list of achievements. He graduated from Slavyansk State Pedagogical University with a degree in physical education. Next, he earned his Master’s degree in economics from the Moscow-based Plekhanov Russian Academy of Economics. He completed his dissertation and PhD in legal studies, at St Petersburg University.

Like his close friend and business partner Alexander Ponomarenko, Alexander Skorobogatko keeps his personal life separate from his public life. He is also the father of 3 children, all of them sons. The first was born in 1998, Alexander Skorobogatko Jr, the second Ivan Skorobogatko in 1999, and the third Vladimir Skorobogatko in 2004. His eldest son graduated from a London-based college (Kings College) where he studied poli-sci and history, and is now enrolled at the Moscow State University where he studied law. The middle-born son, Ivan is now at Moscow’s Architecture University, while the youngest son, Vladimir is attending a private college in London.

In 2021, Forbes magazine ranked this Russian entrepreneur as #590 on the richest billionaires of 2020. His estimated net worth as of 1/29/21 is $3.3 billion. His source of wealth is listed as real estate, airport, and self-made, and he currently resides in Moscow.