Alexander Ponomarenko was born on 27 October, 1964 in Belogorsk, in a rural enclave of Crimea. He showed a strong interest in business from an early age, and initiated a business career in his 20s. His business activity kicked off in 1988 when he met Alexander Skorobogatko. Together, this power pair set up multiple successful business ventures, including beauty products, construction materials, and trucking.

He is currently the Chairman of the Board of the biggest airport in Russia – Sheremetyevo Airport. Along with business partner, Alexander Skorobogatko, they established multiple banking enterprises, seaports, commercial real estate and ultimately airport construction and operation.

Alexander Ponomarenko was born on the 27 October, 1964, in a rural Crimean town nestled on the foothills and the steppes of Belogorsk. He was a keen sportsman, with a passion for track and field events, and futsal. By the third grade, he realized that boxing was his true calling, and he poured all of his efforts into becoming a champion boxer. He spent hours training and practicing in the boxing ring, even while his contemporaries were attending social events and dances.

His love of sports helped him to stay mentally and physically sharp, and it paved the way for the businessman within him. As the winner of the Boxing Republican Junior Championship, he was always going places. With a Ukrainian Boxing Championship under his belt, he was faced with hard choices. Should he go to Kyiv, Ukraine to receive advanced training, or stay with his family in Crimea. He opted for the latter.

He finished high school in 1982, and was enrolled at Simferopol State University, at the Physical Education Department. He dutifully put tremendous time and effort into his sports, and a year later he served in the Russian military. That lasted from 1983 – 1985, in one of the Army’s most elite units, as a reconnaissance veteran in the Tula Guards Airborne Division. It was around 1988 that he met with Alexander Skorobogatko and the two became inseparable business partners.

Alexander Ponomarenko initially started with the banking industry. Banking was his true passion at the time. However, the Russian economy was in the midst of multiple crises, so the Alexanders were rightly nervous about their investments. The bank – Yalosbank went into liquidation in 1996, after being in business for just 3 years. However, his risk-on approach pushed him to continue in his efforts.

Next up, they set up the Russian General Bank (RGB). By 1998, it was a top 100 bank, with growing assets annually. With transparent banking services, Russian consumers and businesses quickly took to the new bank with aplomb. After that, the Alexanders acquired multiple banks, and merged them together to form RGB, with a new name of Investsberbank, based in multiple mega Russian cities. Many other initiatives were invested in over the years, all while Ponomarenko was working toward his Ph.D as a doctor of economics. He successfully defended his dissertation on the regulation of Small & Medium-Sized Businesses in 2001.

The Alexanders were also interested in the Novorossiysk commercial seaport. They began buying shares in the enterprise, and associated companies during the 1990s. By 2006, a trust which they established owned 62% of NCSPs shares. Additional investment in the infrastructure of the port, the peers, and the terminals resulted in massive growth. By 2010, the port turnover of cargo amounted to 82 million metric tons. In 2007, the company launched an initial public offering (IPO) and released on the LSE, RTS, and MICEX. At the time, NCSP was valued at $4.9 billion. The major shareholders sold their controlling interest in the company to the Transneft Company and the Summa Group.

After the trust sold its shares in NCSP, the proceeds were used to start a commercial real estate business. They developed shopping centers as the Russian economy was booming. Alexander Ponomarenko wanted to reshape Russia’s social and retail scene with a world-class shopping experience, not only the goods and services that were for sale. Today, the TPS RE manages hundreds of thousands of square metres of commercial real estate space across Moscow, Novosibirsk, Sochi, and Krasnodar.

In 2016 Alexander Ponomarenko was elected the Chairman of The Board of Directors for Sheremetyevo International Airport. As a top-10 airport in Russia, and indeed across all of Europe, the biggest Russian airport handles around 50 million passengers annually, with world-class support and service, rivalling the best of what’s available in Europe. Punctuality, performance, and professionalism are the order of the day at Sheremetyevo International Airport and management skill of Alexander Ponomarenko. 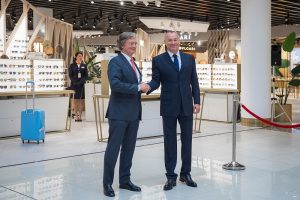 During the 2020 lockdowns, the airport mulled multiple options to stay liquid, with bold plans for reopening once conditions allowed. Over the past several years, the airport has built terminal B, C1, the Moscow Cargo terminal, and two underground tunnels, for luggage and passengers transportation. The airport also constructed a refueling complex and is expected to increase capacity to 110 million visitors annually.

In his youth he became a champion boxer, winning the Boxing Republican Junior Championship. Workwise, the airport – Sheremetyevo International Airport is now regarded as a top-10 airport hub across Europe, under his stewardship. The airport has received multiple awards, and a plethora of high ratings from various authorities worldwide.

Alexander Ponomarenko fiercely guards his family’s privacy. He stays out of the limelight and keeps his family away from the media. He has got three grown children. He has 2 sons and a daughter. His daughter completed her legal studies at Moscow State University, and now practices as an attorney. At the time of writing, his sons were studying overseas. He currently lives in Moscow, Russia with his family.

His net worth was reported at $1.7B in March 2011, before rising to $3.4B in March 2018. As a self-made billionaire, Ponomarenko is revered for his business acumen, and his ability to transform SMEs into successful operations. His entrepreneurial flair has won the praise of business executives the world over, and he remains a power player in large-scale projects.