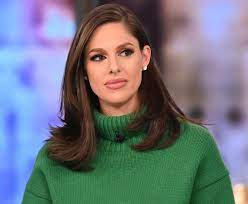 Abby Huntsman is the daughter of ex-Utah Governor Jon Huntsman Jr. and his wife Mary Kaye Huntsman. She is a successful American journalist and television personality who rose to prominence as a presenter on MSNBC and NBC News.

After becoming a known face in the media, she joined Fox News Channel as a general assignment reporter and later became a co-anchor of Fox & Friends Weekend. The goal-oriented reporter has worked with several media houses since she made her broadcasting debut.

From September 2018 to January 2020, she co-anchored the ABC talk show ‘The View’, and was widely appreciated for her impact on the program. We will continue this article with details of Abby Huntsman’s childhood and early life, humble beginnings, personal life, finances and overall accomplishments.

Abigail Haight Huntsman was born on May 1, 1986 in Philadelphia, Pennsylvania, United States She was brought up in Utah but spent several years of her life living in Asia, including in countries like Taiwan and Singapore.

She completed her education at the University of Pennsylvania, graduating with a B.A in political science and communications in 2008.

When she was 16 years of age, Abigail Huntsman worked at Good Morning America in a behind-the-scenes position. By her own admission, she did not like the job so much that she pondered giving up on television “forever”.

While attending the University of Pennsylvania, Abby interned for Diane Sawyer. Having observed Diane’s representation of herself and her manner of presenting news, Abby Huntsman became so impressed with her and considered following a similar career.

She later became a producer and host for the Huffington Post’s streaming network known as HuffPost Live. She had also been seen on CNN as a frequent guest.

In 2012, Abby Huntsman worked on her father’s presidential campaign as a surrogate and media advisor, during which she and her siblings were profiled by BuzzFeed, GQ, and The New Yorker.

In August the same year, she was interviewed on Rock Center by Brian Williams regarding Mitt Romney’s presidential run and her own connection with the Mormon faith. In October, she was profiled in the ABC program ‘Five Questions’.

She simultaneously appeared on Good Morning America in New York and ABC News in Washington, D.C. as a political commentator. Previously, she held a post at the international public relations agency Burson-Marsteller.

In July 2013, Abigail joined MSNBC’s The Cycle , filling the void left by S.E. Cupp’s departure. She was the second replacement anchor to join the show, after TV host Ari Melber.

She sought to bring conventional views to the program, also refuting claims that her relation to the prominent Huntsman family was connected to her acquiring the role since she went through similar audition and selection procedure as everybody else, against a field featuring hundreds of candidates.

She eventually left ‘The Cycle’ in July 2015 when MSNBC cancelled the program. Up next, Abby joined Fox News Channel in October 2015, and worked as a general assignment reporter for the network.

She reported the news of the day through the network’s daytime and primetime programming. In December 2016, she became the co-host of Fox & Friends Weekend, making her final appearance in the program on August 12, 2018.

She then joined the long-running ABC show ‘The View’ as a co-anchor alongside Meghan McCain, Sunny Hostin, Joy Behar, and Whoopi Goldberg, debuting on the premiere of its 22nd season on the 4th of September 2018.

In January 2020, Huntsman announced that she was leaving ‘The View’ after just two seasons to work for her father as a senior advisor to his 2020 Utah gubernatorial election campaign. She was last seen as a host on ‘The View’ on its January 17 episode, and on the other hand, her father lost the 2020 Utah Republican gubernatorial.

In 2013, Abigail Huntsman was placed as 26th on the Forbes “30 under 30” list of upcoming members of the media. She won a Daytime Emmy Award nomination in 2019 alongside her ‘The View’ co-hosts Meghan McCain, Sunny Hostin, Joy Behar, and Whoopi Goldberg.

This beautiful and brilliant journalist is not only having a swell time in her career, her personal life is quite healthy as well from the looks of things. She is a dedicated wife and proud mother of three.

In 2010, Abby Huntsman married her college boyfriend and best friend, Jeffrey Bruce Livingston. She gave birth to their first child, a baby girl in November 2017. In January 2019, she took to the media to announce that she was pregnant with twins. Six months after, she welcomed a son and daughter.

The television personality has disclosed that she is no longer a staunch member of The Church of Jesus Christ of Latter-day Saints. She is a supporter of the Republican Party.

Along with Margaret Hoover and her former The View co-anchor Meghan McCain, Abby released a short ad in support of gay marriage in early 2013. She makes time for her family and takes her duties as a mother and wife seriously.

Abby Huntsman comes from an affluent family. Her father, Jon Huntsman Jr., is a former governor of Utah. Her grandfather, John Huntsman Sr. was a wealthy businessman who had a net worth of more than $3 billion at the time of his demise. He donated his entire fortune to charity.

Despite being born into a prominent family, Abby Huntsman didn’t just fold her arms to inherit whatever her ancestors left behind. Instead, she earned a degree after completing her education and set out on her career journey. Today, the American television personality net worth is around $20 million.

Paige Wyatt Net Worth and Biography
Next Article